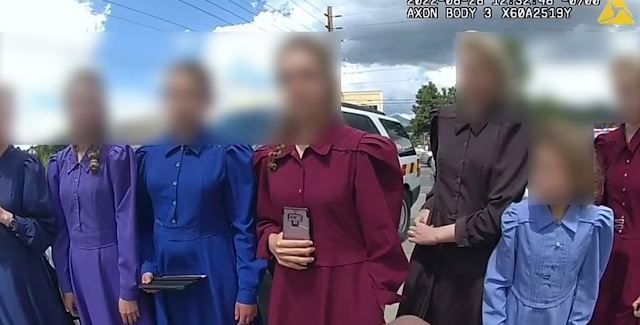 Mormon Wives Soon To Be Rad Trad Wives..
Sure why not.
Makes sense.
Send him all your money so he can support all his wives.
Should be the number one Rad Trad Pod Caster within a week!
Maybe FSSP Serial Convert Dr Taylor Marshall will endorse him....
The new serial convert to tradition will have to auction off his nineteen wives (keeping one for himself) to be legit in the eyes of all the other Rad Trad Serial Converts. All wives to be auctioned off already come with clothing and have cooking and canning abilities...most are trained in firearms and know how to make bullets....
Ann Barnhardt will be jealous...
Bentley-driving Arizona 'Mormon prophet' had TWENTY wives as young as nine including his own daughter, FBI says - and drove them around in a TRAILER with a bucket for a toilet
An Arizona polygamist cult leader had 20 wives aged as young as nine, married his own daughter, and drove his spouses around in a trailer with a bucket for a toilet, it is claimed. A new FBI affidavit has revealed shocking allegations against Bentley-driving Samuel Rappylee Bateman, 46, who was arrested in Arizona earlier this year. Samuel Rappylee Bateman, 46, is accused by witnesses of 'marrying' up to 20 women and girls as young as nine, including his own daughter, according to the affidavit filed on Friday, the Salt Lake Tribune reported. He has been in federal custody on obstruction charges since his September arrest, which unfolded after Bateman was pulled over by cops while transporting underage girls inside a squalid trailer furnished with a couch and a bucket for a toilet. Bateman leads a splinter group of the radical Mormon offshoot Fundamentalist Church of Jesus Christ of Latter-Day Saints, or FLDS -- but Bateman is apparently so extreme that he has been denounced even by former FLDS leader Warren Jeffs, a convicted child rapist. The FBI affidavit, filed in the Eastern District of Washington, outlines sickening allegations of incest, group sex acts involving adults and underage children, and child sex trafficking. Source