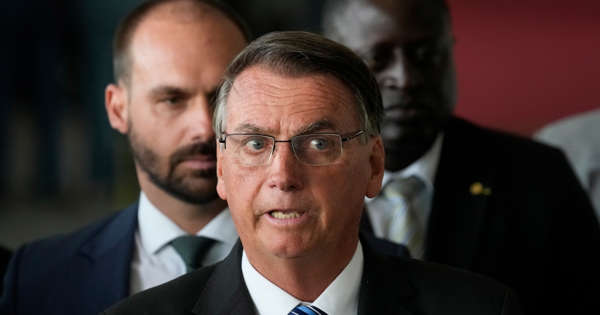 Exodus beginning?
How long before the FSSP Rad Trads follow?
Bolsonaro’s sons request Italian citizenship
Outgoing Brazilian President Jair Bolsonaro’s two sons on Tuesday visited the Italian Embassy in Brasilia to request Italian citizenship, just days after their father lost reelection to President-elect Luiz Inácio Lula da Silva. Flavio Bolsonaro, a senator, and his brother Eduardo Bolsonaro, a member of Congress, are expected to continue serving as legislators. Flavio Bolsonaro was elected to an eight-year term in 2018, and Eduardo Bolsonaro was reelected this year to a third four-year term. “I am a senator of the republic for four more years, I intend to run for reelection, and before anyone starts to create far-fetched theories, leaving the country is not an option for me,” Flavio Bolsonaro said, according to Brazilian news outlet Metrópoles. Still, Flavio Bolsonaro confirmed he began the process of seeking Italian citizenship in 2019. Many EuropeaStill, the Bolsonaros’ appeal for Italian citizenship comes as Brazil gets ready to drop their fathers’ far-right government in favor of Lula’s left-leaning policies.n countries grant citizenship to descendants of nationals who emigrated from Europe, and it is common in Latin America to seek European citizenship.And Brazil has often prosecuted accusations of corruption against former elected officials at all levels. Lula, a former two-term president, spent nearly two years in jail after a conviction on charges of money laundering and corruption. The conviction was later dropped by a Supreme Court decision that invalidated the jurisdiction of the court that convicted him. The judge who originally convicted Lula, Sergio Moro, was later Jair Bolsonaro’s minister of justice and public security from 2019 to 2020. Moro was elected to the Brazilian Senate in this year’s legislative election. Source