dxv515 November 13, 2022
'Female suicide bomber' is blamed for blast that kills at least six people and injures 81 on busy Istanbul street: Fireball explosion rips through packed shopping district popular with tourists as President Erdogan says attack 'smells' of terrorism
At least six people have been killed and more than 80 injured after a huge explosion ripped through popular shopping street in Istanbul today in what Turkey's Vice President has claimed was a terrorist attack, potentially authored by a female suicide bomber. Shocking videos posted online showed the moment a fireball erupted on the street amid a loud blast as pedestrians turned and fled in horror. Other harrowing clips showed bodies and an empty pushchair lying on the ground in the immediate aftermath of the explosion before the scene was cordoned off by forensic teams. Istiklal Avenue, popular with both locals and tourists and lined with shops and restaurants, was packed with people when the blast rang out at around 4:20pm local time (1:20pm GMT). Four people died at the scene, with another two succumbing to their injuries in hospital, and it is feared casualty numbers will increase overnight. The cause of the blast is not clear but Turkish President Recep Tayyip Erdogan said it had 'smell' of a terror attack. 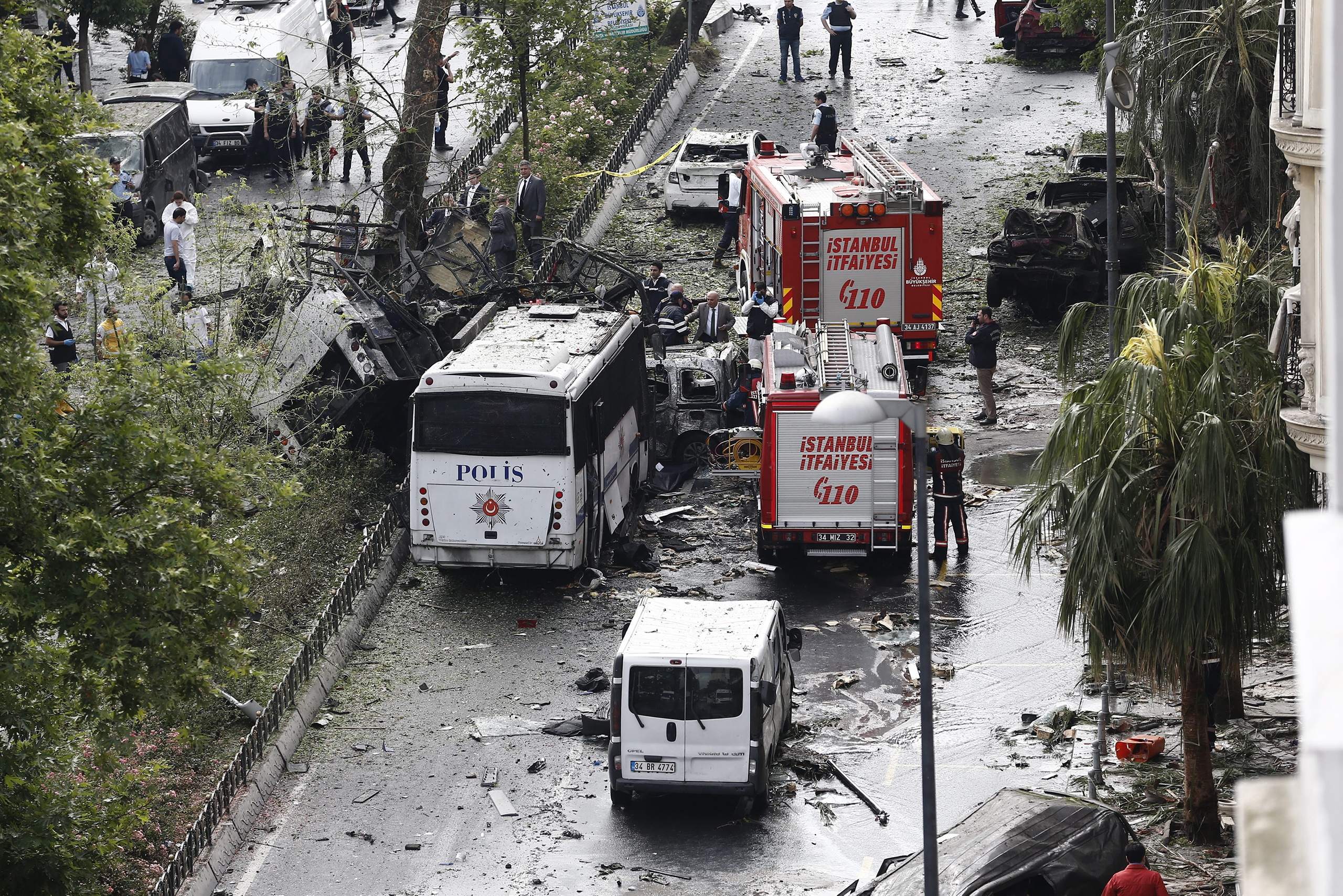 He did not specify who may have been behind the explosion but stated a woman was thought to have been involved. In a televised statement he said: 'Our nation should be sure that the perpetrators of the incident on Istiklal Street will be punished as they deserve. 'It would be wrong to say this is undoubtedly a terrorist attack but the initial developments and initial intelligence from my governor is that it smells like terrorism.' He added: 'Efforts to take over Turkey and the Turkish nation through terrorism will not reach its goal.' Vice President Fuat Oktay meanwhile visited the scene alongside interior minster Suleyman Soylu, declaring the blast appeared to have been authored by a female suicide bomber, though he gave no evidence. Oktay said: 'We believe that it is a terrorist act carried out by an attacker, whom we consider to be a woman, exploding the bomb.' Social media users said shops were shuttered and the avenue closed down as forensic teams and emergency services moved in to examine the scene. But by evening, the avenue was buzzing with tourists and onlookers and some shops stayed open in a show of defiance. 'We are not afraid, we heard the explosion but we are open as long as the police don't come and ask us to close,' said Mustafa Guler, manager of the Keyif Nevizade restaurant in the neighbourhood. No one has yet claimed responsibility for the attack, though Istanbul and other Turkish cities have been targeted in the past by Kurdish separatists, Islamist militants and other groups. Source