dxv515 May 17, 2022
Train's fuel tank punctured during derailment caused by fallen tree in Fall River, Massachusetts
FALL RIVER, Mass. — Crews are working to clean up hundreds of gallons of diesel fuel that spilled out in Fall River during a train derailment in the Massachusetts city. Fall River police said they received a call about the derailed train near the intersection of North Main and Clark streets shortly before 7:30 p.m. Monday. The train involved was a freight train that was carrying hazardous cargo, according to police. When officers arrived at the scene, they learned there was no immediate threat to public safety. Police said the train was traveling south when it collided with a tree that had fallen onto the tracks. Due to what was described by the train crew as a low-speed collision, the train derailed and came off the track. Although it was off the rails, the train remained upright. But when the derailment happened, the train's diesel fuel tank was punctured and began to leak. An environmental clean-up company is responding to the scene due to the leading diesel fuel. A city spokesperson told WLNE-TV in Providence that 300 gallons of diesel fuel spilled out of the 1,800-gallon tank, and the leak has since been contained. No injuries have been reported by Fall River police. "It is important to note that the train’s cargo is intact. The environmental impact of the spilled diesel fuel is the primary concern at this point," reads a statement from the Fall River Police Department. Police said the first priority is to empty the 1,800-gallon diesel fuel tank and once that is addressed, the work of getting the train back on the tracks can begin. The train that derailed is owned by Mass Coastal Railroad. Police said representatives from Mass Coast Railroad are at the scene. Fall River police officers and firefighters are also at the scene providing assistance. Source 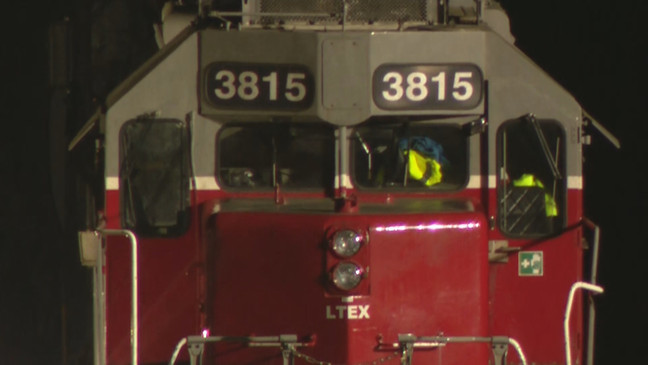