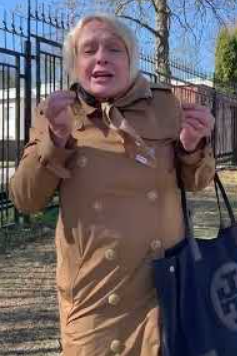 Since the FSSP Rad Trad Community got called out for being the creeps that they are for idolizing blood thirsty Putin and claiming Putin is the Savior of Christendom and defender of Western Civilization - they now have backed down and claim  that both sides Ukrainians and Russians are bad. Both side are to blame. The witch Ann Barnhardt said as much in her latest screed #172 - recorded as she was talking to the cement wall.
LOL!
As if that helps!
FSSP Rad Trads still refuse to condemn Putin's INVASION of the Ukraine and  blissfully ignore the tens of thousands of dead Ukrainian civilians murdered by the Russian Invaders.
The FSSP is sick
This is just another example to confirm that it will be the FSSP that will murder the Fatima Pope and Faithful on top a steep Mountain some day.
Again. The FSSP needs to be shut down and all its priests laicized.
To you sick FSSPers enjoy one of your own demented and wicked souls verbally attacking a Ukrainian woman.

This is allegedly Russian teacher Eugenia Karlsson living in Sweden, who has verbally attacked a Ukrainian woman, insulting her with worst racial slurs. Helga Kadya filmed the case, watch with English subtitles. I have checked the translation, it's correct pic.twitter.com/VfYESlFE3g