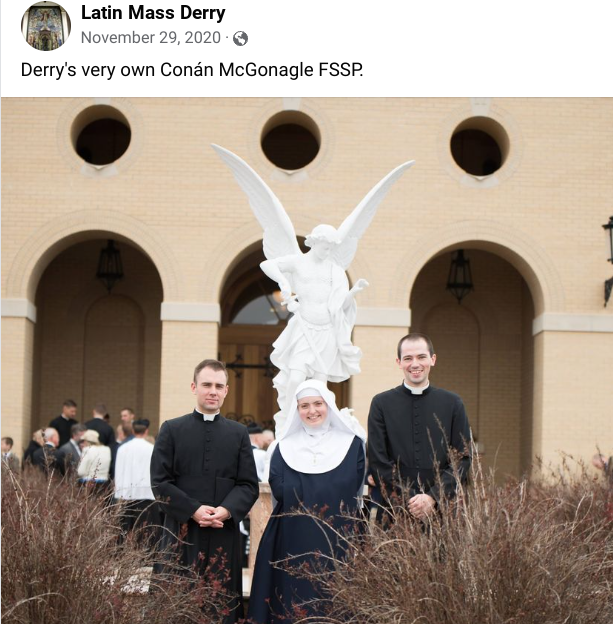 FSSP Our Lady of Guadalupe Seminary
Lancaster County, Nebraska
The FSSP is in Derry/Londonderry and I'm sure they carry guns on their person when attending the Holy Sacrifice of the Mass at St. Columba's Church, Long Tower, Derry.
About Saoradh
Saoradh are a Revolutionary Republican Party, organised across Ireland. Founded on the 24th September 2016 following a significant collective of Irish Republican activists, who for a number of years acted autonomously, after a number of years of debate, consultation and organisation, constituted and launched a Revolutionary Irish Republican Party. Saoradh seek the establishment of a 32 County Socialist Republic free from British rule. Saoradh aim to build campaigns to fight back against imperialism and capitalism to empower the Irish people in the ongoing struggle to regain our national sovereignty, end partition and build a new fair society. Saoradh believes that Ireland should be governed by the Irish People with the wealth and wealth producing mechanisms in the ownership of the Irish people. This can not happen while British imperialism undemocratically retains control of Irish destinies and partitions our nation. This cannot happen while a neo-colonial elite in a subservient supposed indigenous administration sells the nations labour and natural resources to international capital. Saoradh does not believe that British imperialism or capitalist exploitation can be confronted in the structures they have created to consolidate their undemocratic control of the Irish nation. As such Saoradh believe any assembly claiming to speak for the Irish people without being elected by the united people of the Irish nation to be illegal. Saoradh will seek to organise and work with the Irish people rather than be consumed and usurped by the structures of Ireland’s enemies, standing on a long and proud revolutionary Irish Republican history of resistance; inspired by the actions and words of Tone of Connolly, of Mellows, of Costello and of Sands . 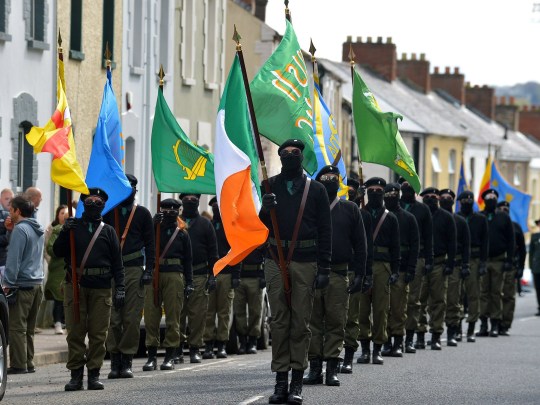 Five ‘terror’ arrests after Northern Ireland paramilitary march turns violent
Five men have been arrested on suspicion of terror offences after violence erupted in Northern Ireland. Molotov cocktails were thrown at police vans after dissident republicans marched through Derry/Londonderry. A group wearing paramilitary-style clothing and accused of links to the New IRA marched through the city this afternoon. The group – which calls itself Saoradh – went ahead with the march despite appeals from the family of murdered journalist Lyra McKee.It coincided with the three-year anniversary of her death. She was struck by a stray bullet while covering rioting in the Creggan area of the city in 2019. Vigils took place in her memory in Belfast and Derry on Monday. The Police Service of Northern Ireland said the five men – aged 29, 38, 40, 50 and 54 – were arrested under the Terrorism Act. A sixth 40-year-old man was arrested on suspicion of disorderly behaviour. Source