A Brief Treatise of Usury Chapter 1 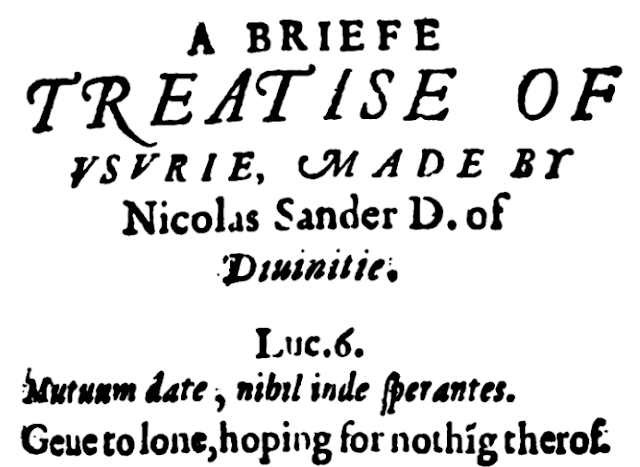 A BRIEFE TREATISE OF USURIE, MADE BY Nicolas Sander D. of Diuinitie
The occasion of this Treatise, and the arguments which are commonly made for the defense of usury, and what is usury.
The first chapter.
Did not intrude my self (good Reader) to make this Treatise, but was forced thereunto, by very necessity: except I would willfully suffer my Chriſtian brethren to run headlong into vice, and to defend that for lawful, which is utterly against the ordinance of God. And surely when I saw, that a sin was not only committed (which cometh of the frailty of man) but was also defended: then I thought it my duty, not to hold my pen any longer.
The matter I speak of, is usury, in defense whereof thus I have heard diverse men reason at several times. I have (say he ) a poor stock of money lawfully gotten, it lye by me idly, and it will quickly be spent, if it be not occupied. I was not brought up in the trade of merchandise, I have wife and children, who are like to beg, unless I provide some perpetual relief for them. In this case what shall I do with my money but employ it so, that it might not be lost, and yet might bring me some yearly profit?
Again, I lend it to such a merchant whom I know to take commodity and no hurt thereby: why then may I not take profit of mine own money together with him? or why should he enrich him self with my money, and not be bound to give me some part of his gain?  Hereunto when I made answer, that the word of God did forbid usury: he replied, that he thought it was rather a counsel given in Gods word to avoid extreme taking of usury, then any such precept as bound men to the obedience thereof under the pain of everlasting damnation.  Nay (said I) that can not be so . For the Church hath taken it to be a commandment which must be kept under the pain of damnation, and thereupon it hath forbidden open usurers to be admitted to the communion of the altar, and to be buried in holy ground, and their offerings to be received, under the pain of suspension to him that buries, or else receive their oblations.
Here began a new disputation, which is the true Church, and what power positive laws have. Yea the word of God (according to these new interpretations) is also brought forth, that such usury as bite him sore who borrow, is indeed forbidden (for in the Hebrew usury is named of biting ) but not such as doth bring commodity, as well to the borrower, as to the lender.  I wondered to see what thirst the devil made, to maintain that most heinous crime of usury, in so much that he hath found the pretense of holy scripture and of Gods word for it.
To make short the disputation, and to cut of the unprofitable talk of words and names, I said at the last (which now God willing I will prove) usury is utterly against God and Nature, even as man killing is. And therefore whatsoever the holy Scripture or the Catholic Church hath decreed thereof, it hath decreed it as against one of the greatest mortal sins that can be. So that now it is my part to show, how usury is not only against the counsel of God expressed in the holy scriptures, but also against his will and commandment: the breach whereof is everlasting death as it shall appear both by the circumstance of the places wherein it is forbidden, and also by the reason of the forbidding, this only being first known: that, usury is all manner of gains, which is either bargained or hoped for by the force of the contract of giving to loan, Whether money be lent, or oil, corn, Vine, or any like thing that is spent with the first natural and proper use thereof. for when the use of that thing which can be but once used of the borrower without the spending thereof and which by the very delivery to the end it may be used, is alienated from the lender, is paid for that is real usury and when the lender hath a desire to be paid for the use of that thing, that is mental usury.