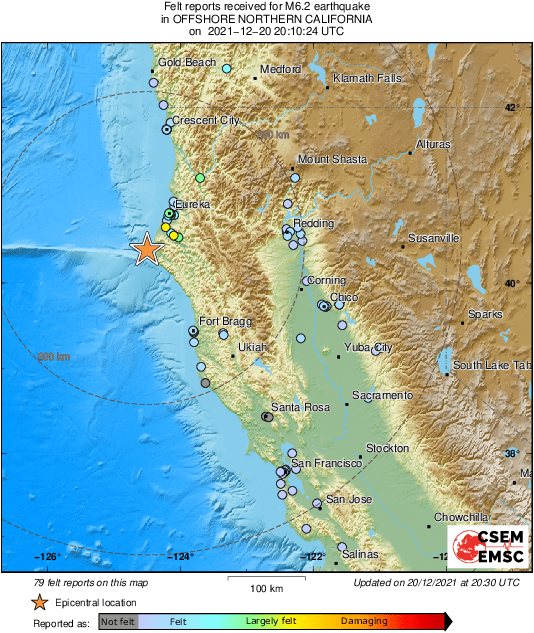 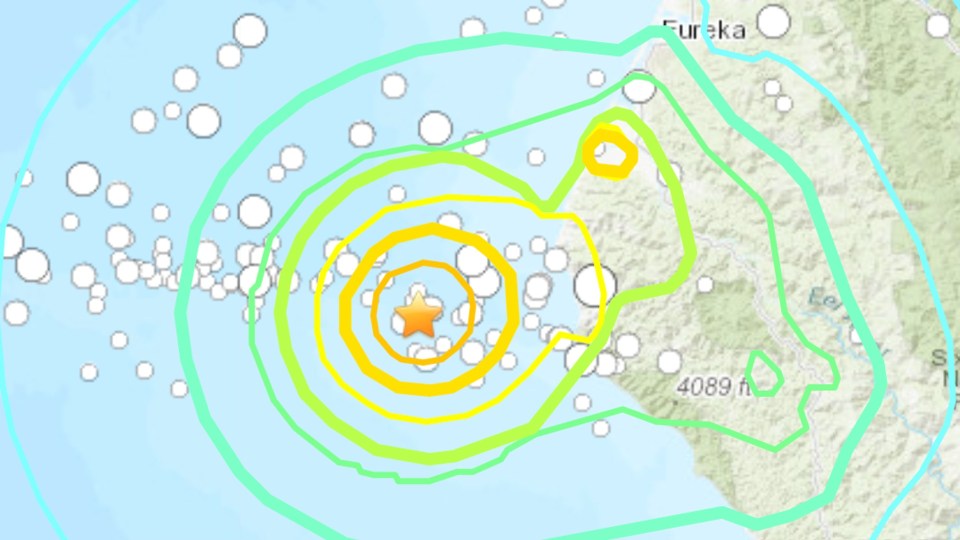 A magnitude 6.2 earthquake was recorded off the coast of Northern California early Monday afternoon, the U.S. Geological Survey reported. The temblor, which hit around 12:10 p.m., was centered in the Pacific Ocean, about 24 miles west of Petrolia and 44 miles southwest of Eureka, according to USGS. Multiple aftershocks with magnitudes in the 2.5 and 4.0 range are impacting the area, state officials say. There were no immediate reports of any injuries or damage. The California Governor’s Office of Emergency Services is “actively monitoring” the situation, according to a tweet from the agency. The quake’s preliminary magnitude was measured at 5.8 before it was upgraded by the Geological Survey a short time later. Shaking was felt throughout the northern part of the state and as far south as the Bay Area, USGS’s website showed. “Moderate to strong shaking was recorded by the seismic network along the coast. The earthquake was felt in San Francisco by this CGS geologist!” the California Geological Survey tweeted. San Francisco is about 250 miles from Petrolia. The quake’s location was off Cape Mendocino in the Mendocino Fracture Zone, which marks the southern boundary between the Juan de Fuca and Pacific plates, according to seismologist Lucy Jones. A tsunami is not expected an no warning has been issued. As Jones explained: “It is a transform fault, meaning the motion is sideways. No vertical motion so little water is displaced and thus no tsunami warning.” Source
LA SALETTE + FATIMA TIMELINE:
1. Two Popes. (13 March 2013)
2. Manifestation of the Forerunner to the Antichrist (21 October 2019)
3. Death of Two Popes (_ _ / _ _ / 2022)
4. Start of Thirty Five Years Worth of Chastisements (_ _ / _ _ / 2022)
5. Rise of the Political Power of the Forerunner to the Antichrist (_ _ / _ _ / _ _ _ _)
6. Creation of Forerunner's Nationalist Army (_ _ / _ _ / _ _ _ _)
7. Persecution of the Catholic Church by the Forerunner and His Nationalist Army (_ _ / _ _ / _ _ _ _)
8. The Murder of the Fatima Pope and Faithful on top a Steep Mountain by the Forerunner and his Army.
9. The Rise of the Great Monarch & Great Pontiff (near the end of the 35 year Chastisement)
10. The death of the Forerunner to the Antichrist.

PROPHECY OF MELANIE ON TWO POPES:
"I didn't see, I don't see any Great Pope or Great Monarch before an extremely great tribulation, horrifying, terrible and general for all Christendom. But before that time, twice there will be a short lived peace; TWO shaky, servile, doubtful popes" Mélanie

REMEMBER - THE 35+ YEARS WORTH OF CHASTISEMENTS DO NOT START UNTIL THE TWO POPES ARE DEAD......
“The great chastisement will come, because men will not be converted; yet it is only their conversion that can hinder these scourges. God will begin to strike men by inflicting lighter punishments in order to open their eyes; then He will stop, or may repeat His former warnings to give place for repentance. But sinners will not avail themselves of these opportunities; He will, in consequence, send more severe castigations, anxious to move sinners to repentance, but all in vain. Finally, the obduracy of sinners shall draw upon their heads the greatest and most terrible calamities. Mélanie
“We are all guilty! Penance is not done, and sin increases daily. Those who should come forward to do good are retained by fear. Evil is great. A moderate punishment serves only to irritate the spirits, because they view all things with human eyes. God could work a miracle to convert and change the aspect of the earth without chastisement. God will work a miracle; it will be a stroke of His mercy; but after the wicked shall have inebriated themselves with blood, the scourge shall arrive Mélanie