I wonder which FSSP knucklehead will be the first to interview Rad Trad Hero Kyle Rittenhouse
I don't think Rittenhouse is even a Roman Catholic.
But already ALL FSSP Rad Trad Influencers have turned him into a SAINT....
Why?
Because Kyle used a gun to defend himself.
That's all it takes to be a SAINT on the FSSP Rad Trad Influencer calendar - just use a gun.
FSSP Rad Trad Influencer don't care if you are a JEW, Heretic or Muslim - as long as you use a gun to defend yourself you make it on the FSSP Rad Trad Influencer calendar.
Remember Foxe's book of martyrs with a Calendar that replaced all the Catholic Saints with religious and political heretics?
Rad Trads are doing the same only they just haven't put into print yet.
You think I'm exaggerating?
List of Sons of Cain who idolize Rittenhouse I wonder which one will be the first to interview their latest non-Catholic GUN SAINT:
1. Ann Barnhardt
2. SuperNerd
3. Jew Vanessa
4. Fr. Altman
5. Steve Cunningham
6. Alexander Tschugguel
7. Steve Skojec
8. Taylor Marshall
9. Anonymous Mike of RTF Fame Parrott
10. Hilary White
11. Pope Viganò
12. Gary Voris
13. Witch Niles
14. Charles A. Coulombe
15. David Gordon
16. Michael Matt
17. Timothy Gordon
18. Elizabeth Yore
19. Eric Sammons
20. Father David Nix
21. Fr. John Zuhlsdorf
22. Jamie Skojec
23. John Zmirak
24. Joseph Shaw
25. Joseph Sciambra
26. Julia Meloni
27. Nurse Claire
28. James O'Keefe
29. Timothy Flanders
30. Patrick Coffin
31. Ryan Grant
32. Laramie Hirsch
33. Michael Hichborn
34. Michael Lofton
35. Oakes Spalding
36. Peter Kwasniewski
37. MIlo  Yiannopoulos
38. and anyone else that I forgot to mention.
Hey don't you think there is an obvious problem here when the top 40 or so Rad Trad Influencers are FSSP Latin Mass attendees?
Why would anyone want to be on this FSSP list?
If you are on this FSSP list and have qualms about being listed with these other FSSP degenerates please let me know and I will take you off.
Something is rotten in the FSSP
Kyle Rittenhouse was 17 when he shot and killed three. Kyle was born  in Antioch, Illinois on 3 January 2003 so he is 18 now.
So can I ask you a question if any of the above male FSSP Rad Trad Influencers were to woo or court or let others know that they were interested in a 18 year old girl...wouldn't you think that that was creepy?
Would not FSSP heads explode?
What a scandal it would be in the FSSP Camp.
So if a FSSP MIDDLE AGED FEMALE Rad Trad Influencer fawns over a 18 year old BOY on the the internet and desires that the BOY pay a visit to her van down by the river - wouldn't that be creepy?
Or does Ann get a pass?
You're a bunch of assholes...... 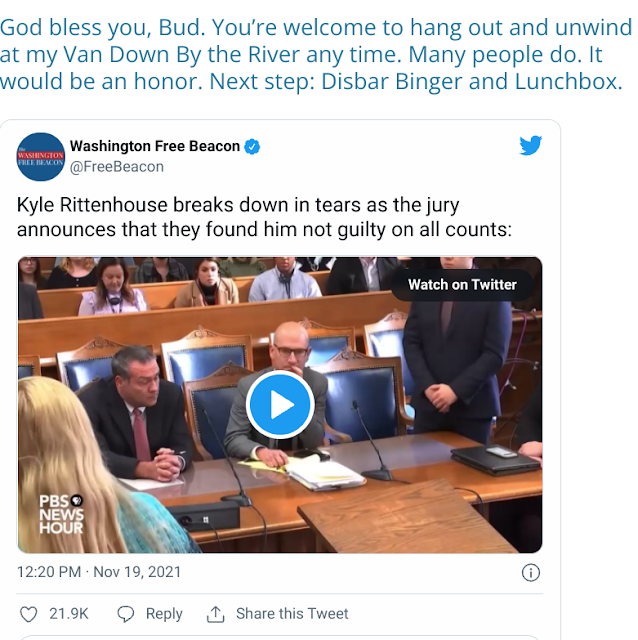