Remember when Gordon claimed he got fired for a Tweet......
Gordon got kicked out of California....for one Tweet?
Actually I think Gordon got fired because his students didn't like him and the parents didn't want him around their kids...300 signatures said Gordon had a long history of hatred and ignorance on social media....
Hey Gordon how about some transparency....Lets see the actual petition that was signed by 300 souls?
One Tweet my ass.
BAKERSFIELD, Calif. — A teacher at Garces Memorial High School claims he has been fired over controversial statements made on social media regarding the Black Lives Matter movement. Timothy Gordon regularly posted to social media on Twitter and YouTube, but his comments were met with backlash from students and alumni. According to a petition created calling for the dismissal of Gordon, members of the Garces community believed Gordon was "spreading unacceptable messages of ignorance and hate on social media and in his classroom.""We do not believe that such a person should be granted a platform to teach Garces students. We demand action by the school administration," the petition stated. The petition gathered nearly 300 signatures. According to a Go Fund Me page, claiming to be set up by the Gordan family, a few hours after the petition was created Gordon received an email notifying him he was dismissed from his position. “They’re essentially saying that my voice, which represents, Catholics, Protestants, and even secular Americans of all races, color and creeds that love America, my voice has no place. And people aren’t going to stand for it," Gordon said during an interview with Kern Radio. The Diocese of Fresno’s Office of Education , which oversees Garces, released a statement regarding Gordon's dismissal saying: Mr. Gordon is not authorized to speak on behalf of the Diocese of Fresno or Garces Memorial High School, and neither the Diocese nor Garces Memorial High School condones Mr. Gordon’s recent postings. Source 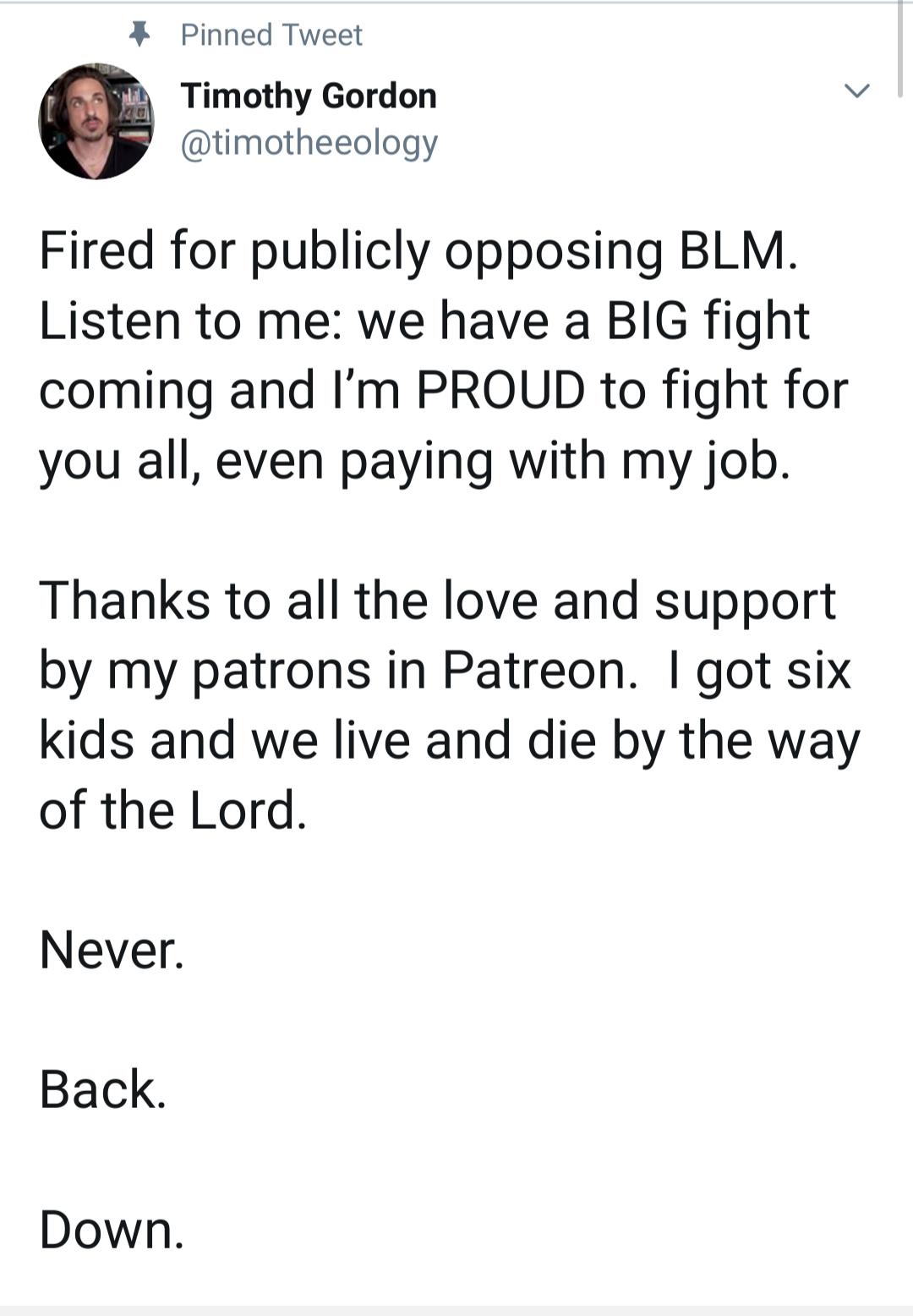 Gordon worships a non-Catholic 17 year-old Kyle Rittenhouse....(Kyle was underage at the time of the shootings...)
Never.Back.Down. Timothy Gordon
Middle aged Gordon even put together this video honoring a 17 year old under age boy......
Never.Back.Down. Timothy Gordon
Kyle Rittenhouse: 'I support the BLM movement'
Kyle Rittenhouse, the teenager who was acquitted of murder last week after shooting and killing two people in Kenosha, Wis., during civil unrest there last year, said he supports the Black Lives Matter (BLM) movement. "I’m not a racist person. I support the BLM movement," Rittenhouse said during an interview with Fox News host Tucker Carlson, a portion of which is slated to air on Carlson's program on Monday evening. "I support peacefully demonstrating," the teen told Carlson, according to a transcript of the interview. "I believe there needs to be change. I believe there’s a lot of prosecutorial misconduct, not just in my case but in other cases. It’s just amazing to see how much a prosecutor can take advantage of someone." Source
Never.Back.Down. Timothy Gordon
LOL!