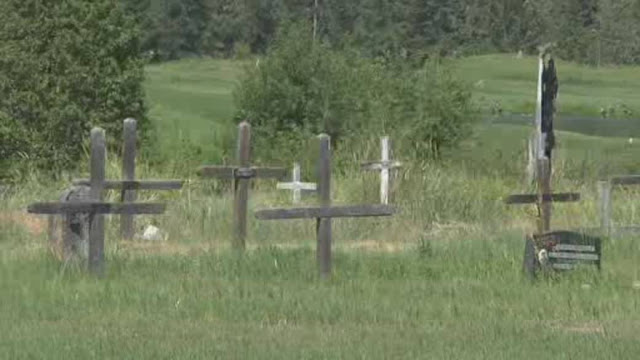 Proper Burial for the dead at Catholic Cemetery

Throwing the remains of an aborted baby in the Trash

‘We knew it was there’: Former B.C. chief says unmarked graves near Cranbrook need more context
The detection of human remains in unmarked graves at the site of a former residential school in B.C. was not an unexpected discovery, according to the area’s former chief. On Wednesday, it was confirmed that ground-penetrating radar found 182 unmarked graves in a cemetery at the site of the former Kootenay Residential School at St. Eugene Mission just outside Cranbrook, B.C. The remains were found when remedial work was being performed in the area to replace the fence at the cemetery last year. Sophie Pierre, former chief of the St Mary’s Indian Band and a survivor of the school itself, told Global News that while the news of the unmarked graves had a painful impact on her and surrounding communities, they had always known the graves were there Source
Versus
Aborted baby retrieved from dumpster along with patient records, biohazard waste July 7, 2021
(LifeSiteNews) – The body of an aborted baby, multiple biohazard waste items, and patient records were dumped into a Cleveland-area abortion center trash containers, Ohio-based pro-life group Created Equal disclosed today. On June 7, pro-lifer and Red Rose Rescuer Matthew Connolly searched the trash containers of the Northeast Ohio Women’s Center (NEOWC) abortion clinic located at 2021 State Road in Cuyahoga Falls. As he carefully looked through each bag, Connolly discovered something most profoundly sad and shocking — the dismembered body of an aborted baby, approximately 16 to 18 weeks’ gestation, killed by the dilation and evacuation method. The aborted baby had been hidden and wrapped up in a blood-stained blue surgical pad used during the abortion procedure. Funeral arrangements are already underway. Source