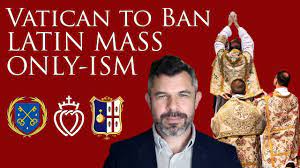 Marshall's actual title used for the video: BREAKING: Vatican to Ban Latin Mass ONLY-ISM - FSSP, SSPX, ICKSP will be loyalty tested on New Mass
What? the SSPX doesn't have say if they are going bi-ritual? Where does the False Prophet Taylor Marshall get the idea that the SSPX will go bi?
The article below by GloriaTV leaves out the SSPX...
ALL Roman Rite Priests Will Be Forced To Preside New Rite Eucharists
Francis plans to force priests who belong to Old Rite communities, to preside the New Rite, Taylor Marshall has learned (July 1). An upcoming Francis document will keep Benedict's Motu Proprio Summorum Pontificum in place for appearance only while requiring from ALL Old Rite priests to go bi-ritual. According to Marshall, “any priest, any parish, any institute and any society that retains being a Traditional Latin Mass only group will no longer be tolerated.” The measure will have a huge impact on the Fraternity of Saint Peter (FSSP), the Institute of Christ the King (ICKSP) and others. These priests don't even know how to preside a Eucharist. Marshall's information matches with the expulsion of the Society of Saint Peter from Dijon with the excuse that these priests do not co-preside the New Rite. Dijon Archbishop Minnerath explicitly said that there will be a new Motu Proprio. He obviously knows its content as he is a member of the Congregation for the Doctrine of the Faith. Source
VIDEO:
Notice that this False Prophet wants to "Unite the Klans"