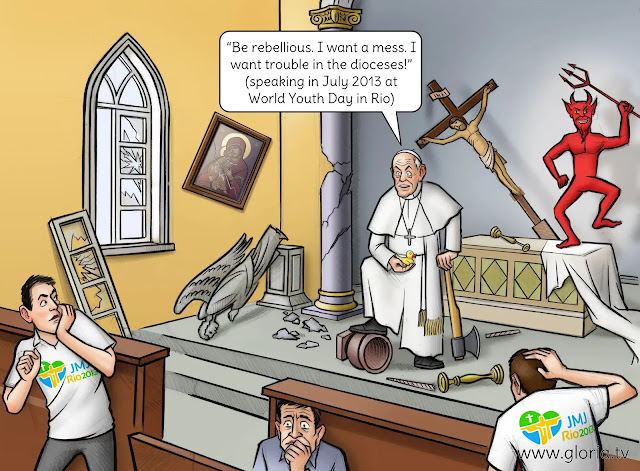 During the June 23 General Audience, Francis was unable to hold back his anger over Catholic bloggers who have become the extra-parliamentary opposition against his tyranny. He lashed out against those who "sow division and mistrust online" calling them "preachers" who through the new means of communication "can disturb communities." The "community" most disturbed by Catholic preaching is Francis' Vatican. Francis identified these bloggers as those who insist to be “as they call it - true ‘keepers of the truth’.” In other words: Francis doesn't worry about the myriad of modernist webpages "who suppress the truth by their wickedness" (Rom 1,18). What's wrong with "keeping the truth"? 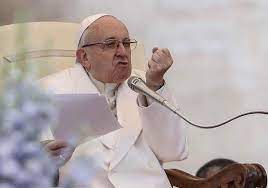 During his rant, Francis resurrected the old arsenal of anti-Catholic propaganda, saying that Catholic bloggers "strongly affirm that the true Christianity is the one they adhere to." The Christian is indeed called to believe, not to doubt. According to James 1,6 the doubter "must not expect to receive anything from the Lord." The elderly Francis who is stuck in the secularised forms of the 1960s, accuses mostly young and convinced Catholics of "identifying with certain forms of the past" - as if "past" or "present" were criteria for the truth. For Francis, there is "a temptation to close oneself up in some of the certainties acquired in past traditions.” With stubborn certainty, he keeps casting a bad light on terms like "certainty" and "tradition." This is partly due to his poor theological formation in the 1960s and to the resulting ignorance of the Scriptures which teach to "stand firm and hold fast to the traditions" (2Th 2,15) and to keep away from believers who don't live according to the tradition they have received (2Th 3,6). Inevitably, Francis also accused these "new preachers" of "rigidity" and a lack of "meekness and obedience." Obedience? Was it not Francis who called out to the youth in Rio de Jainero, "¡Hagan lío!" ("Make a mess). Source