“Priests and religious orders will be hunted down, and made to die a cruel death. Our Lady of La Salette 19 Sept. 1846 (Published by Mélanie 1879)
“The Vicar of my Son will suffer a great deal, because for a while the Church will yield to large persecution, a time of darkness and the Church will witness a frightful crisis. Our Lady of La Salette 19 Sept. 1846 (Published by Mélanie 1879)
More examples of FSSP gun culture.
This is conference hosted by Cream City Catholic - organization started by a woman convert......
Please all these Rad Trads influenced by the FSSP have weapons a lot a weapons. They carry their weapons on their person when attending the Holy Sacrifice of the Mass.
So yeah none of these FSSP'ers will ever be martyred - never, ever.
Voris is talking about martyrdom at Mark 20 min and  then says this:
"Some Of Us May Blow A Few Heads Off In The Process...Hint...Hint" 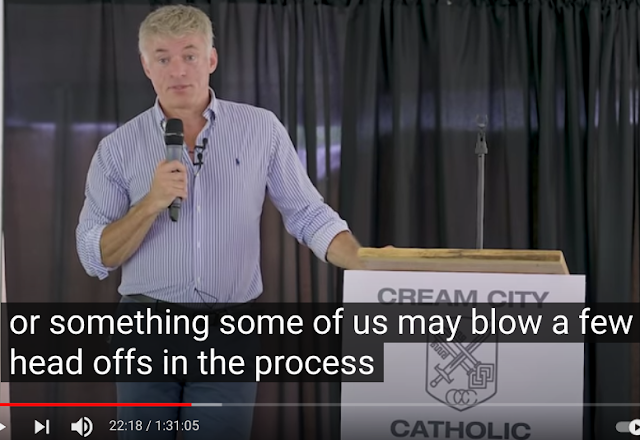 Are these the words of a potential martyr? "Lets Blow A Few Heads Off In The Process...Hint...Hint".
No.
Gun loving FSSP'ers are not future Martyrs they will however Martyr the Fatima Pope and Faithful Catholics on top a steep Mountain someday. And these FSSP'ers will hunt down and murder Priests they do not like just as Our Lady had said at Fatima and La Salette
Then at the 52 Mark Voris complains that he and his followers are being called Terrorists and Extremists - Voris says you must embrace the fact that you have been called Terrorists and Extremist and then go on the attack  - you have to always be in the attack mode, constantly constantly....
Then Voris names a Bishop that you should be aggressive towards and his name is Bishop Barron 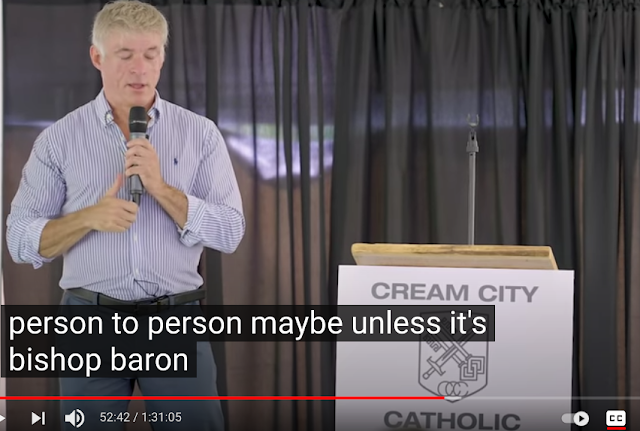 He follows with death threats against Cardinal Cupich + Cardinal Tobin + Cardinal Wilton.
And Voris jokes "well maybe you do have to be aggressive with these prelates person to person"...The audience laughs....
Do you not see that this Sodomite Gary is leading men to go on the offensive and attack priests and Bishops they do not like...
Can you not see this is the plan of Gary?
Here is the Video financed by a woman convert