St. Joan Of Arc
d. 30 May 1431
"But I loved my banner forty times better than my sword. And when I went against the enemy, I carried my banner myself, lest I kill any. I have never killed a man."
"...I loved that sword, because it was found in the church of St. Catherine, whom I loved."Trial of Condemnation, February 27, 1431, Fourth Session
"When I was at Tours or at Chinon I sent to seek a sword which was in the church of Saint Catherine of Fierbois, behind the altar, and it was found at once all covered with rust."
Inquisitors: How did you know that this sword was there?
"This sword was in the earth, all rusty, and there were upon it five crosses, and I knew it by my voices.... I wrote to the prelates of the place that if they please I should have the sword and they sent it to me. It was not very deep under ground behind the altar, as it seems to me, but I do not know exactly whether it was before or behind the altar. After this sword was found, the prelates of the place had it rubbed, and at once the rust fell from it without difficulty. There was an arms merchant of tours who went to seek it, and the prelates of that place gave me a sheath, and those of Tours also, with them, had two sheathes made for me: one of red velvet and the other of cloth-of-gold, and I myself had another made of right strong leather. But when I was captured, it was not that sword which I had. I always wore that sword until I had withdrawn from Saint-Denis after the assault against Paris." 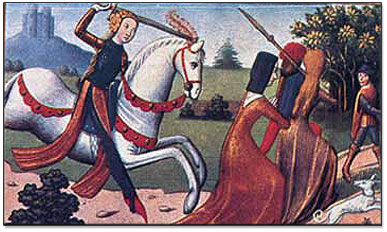 Sword Used To Beat The Back Of A Camp Whore
There is a concerted effort by some to turn Roman Catholic Saints into assault weapon wielding thugs. This is done to justify the modern day practice of stockpiling weapons by some modern day demented gun nuts.
Look you gun totting bitch you are not St Joan of Arc! The Saints would have nothing to do with your little plan of turning the Saints into gun nuts. It's not gonna work. You will lose.
Actually a case can be made that this little endeavor of turning Saints in gun toting nuts is blasphemy.
Do not mock the memory of the Saints
Originally Published 18 JANUARY 2013