Priests and religious orders will be hunted down, and made to die a cruel death. Our Lady of La Salette 19 Sept. 1846 (Published by Mélanie 1879)
I said before that the FSSP Rad Trads would start hunting down and killing priests they didn't like.
These Rad Trad Influencers are all products of the FSSP and word must of been sent down from the FSSP Clergy to change their language so as not to sound heretical by attacking indefectibility of the Church. So yes, the FSSP is correcting its lay members and telling them not to attack the Bride of Christ. Now this is where is gets good (or bad). Because they are forced into a corner. Because they've been called out on this Rad Trad heresy of attacking the indefectibility of the Church - they are forced to change their tune. See Taylor Marshall Video where he has to explain to his followers the indefectibility of the Church: So now that I made all Rad Trad Influencers stop attacking the Bride of Christ - these morons will now only attack the clergy. And will attack with a vengeance. Now I'm not saying that I approve of this path or that I directed these Rad Trad Influencers down this path. But this is what the FSSP Influceners will now do (and there is no turning back) as Our Lady of La Salette as said:
Priests and religious orders will be hunted down, and made to die a cruel death. Our Lady of La Salette 19 Sept. 1846 (Published by Mélanie 1879)
Yes that's right these Rad Trad Influencers will one day hunt down and murder Catholic Priests. Now granted I have been saying this all along that Rad Trads are the ones that will murder Catholic Priests, but even more so now because I directed their focus away from attacking the Bridge of Christ and focusing their attack on the Clergy who Rad Trads consider corrupt. Just read the FSSP darling Gary Voris' website and see how much they hate corrupt clergy. Source
This time the attack took place in South Sudan. I don't know if these are FSSP lay people or lay people influenced by the FSSP....
Assault on Bishop: Priests Acted With True Lay Participation
Three priests are among 12 (other sources: 24) people arrested on April 26, hours after Rumbek's bishop-elect Christian Carlassare was shot, AciAfrica.org reports. Police were following crucial leads from a cellphone found at the crime scene. One of the gunmen who shot Carlassare dropped it, and Carlassare fell on it. Among those arrested are prominent lay personalities of Rumbek Diocese. South Sudan’s President Salva Kiir, a Catholic, asked for a swift investigation of the crime. The acting minister of Information and Communication, William Kocji Kerjok, told Radio Tamazuj on April 26 that "we are treating [the case] as politics within the Catholic Church itself.” He added that the Church's leadership should answer for this, "That is why the government is arresting almost everybody [in the bishop's compound] so that they are held accountable for this.” A careless Vatican needed almost ten (!) years to replace Rumbek Bishop Cesare Mazzolari who died in 2011. It's likely that those who filled this power vacuum feel threatened by the new bishop. Source
As expected the reason given for shooting the Bishop is over sexual abuse allegations - comment is found  on National Catholic Register Bishop-Elect in South Sudan Shot Several Times, Evacuation Plans Underway 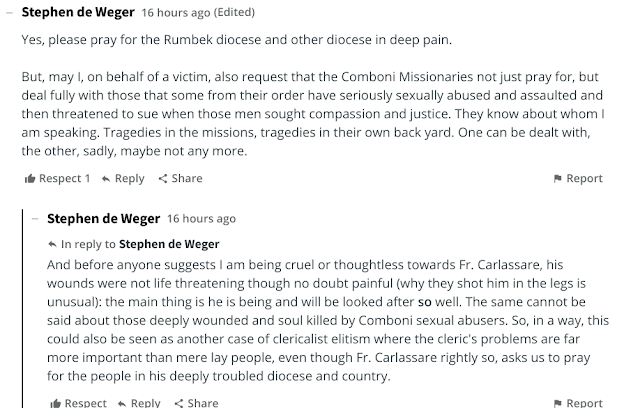 This is the same justification used by FSSP Gary Voris and Thug Brothers in attacking the SSPX. This is the same reason used by the FSSP  to justify the ordering of its FSSP laity to hunt down and murder Priests they don't like. 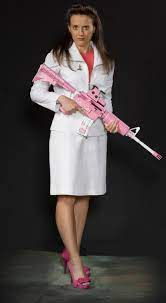