The Communion Antiphon for Twelfth Sunday after Pentecost:
COMMUNION ANTIPHON Ps. 103:13, 14-15 The earth is filled with the fruit of Your works, O Lord, that You may bring forth food from the earth and wine to cheer the heart of man, oil to make his face gleam, and bread to sustain his strength.
The Church leaves this part out of the Communion Antiphon:
Bringing forth grass for cattle, and herb for the service of men.
Cassiodoris on Ps103:14:
That thou mayst bring bread out of the earth: He refines on his earlier words, making the earth which is soaked with heavenly rain bring forth grass for cattle, in other words, provide alms for those who seek them in sundry places. of them is is said; Give to everyone that asks you. They are called cattle because their belly's gluttony makes them shameless, and like cattle they wantonly voice their need; as long as they are hungry they are wholly unable to restrain their cries. Herbs for the service of men means that necessities should be given to the person of whom it is written; Let alms sweat in your hand until you find the just man on whom to bestow them. The persons called men here are those who abound in reason and who cloak their need by strength of endurance; so two types of needy person are described by such allusions.
Many Catholic Bloggers are beggars, the most successful are beggars.
But what kind of beggars or what kind of needy person?
1. shameless gluttons
2. men here are those who abound in reason and who cloak their need by strength of endurance
Yea..most of them fall into the first category.
Who are these on-line shameless gluttonous beggars?
Sodomite Gary Michael Voris is at the top of the list: This COW is a Sodomite and he hid it from everyone, until recently. No need to go into details. Voris makes you pay for his on-line content. Is this begging? Yes in  a twisted way. Please by all means name one Saint who by his teaching others the one true faith charged them money for his lessons? Any? Any? Was there ever any Saint in the whole history of the Church where payment was required first before being taught the faith? Any? Pay me to convert you? No. Its never happened - until now. You wanna learn the faith from Voris? Pay him first.
The next COW on the list is Steve Skojec of One Peter Five. This COW is ex-legion of Christ. Are Skojec's ties to the Legion completely broken? Or does this COW have family and friends in the Legion? Skojec's folly is making Pope Benedict publicly deny the lie that Fr. Dollinger told about a hidden Fatima secret. Steve prides himself on that one.
The next COW is a financial genius Ann Barnhardt. This COW claims Pope Francis is not the Pope. This COW puts a gun in the hand of the Blessed Mother and every martyr and then claims that she has a right to stockpile weapons because there are statues of Saints holding the weapon that was the instrument of their  martyrdom. LOL!
There are other Catholic Blogging COWS out there as well.
If you're needy and you blog please don't follow these COWS, instead be the men who abound in reason and who cloak their need by strength of endurance.
COW = On Line Begging Catholic Bloggers
GRIZZLY = What's In Store....
Originally Published 7 AUGUST 2016
Posted by dxv515  August 07, 2016 ON LINE BEGGING CATHOLIC BLOGGERS ARE LIKE CATTLE: GRIZZLY VERSUS COW...
UPDATE 17 MARCH 2021
In light of recent (begging for Money) events over at Rorate Caeli I re-posted this from five years ago.
Here is Rorate Caeli's Tweet from 2020 admonishing others in giving money to Catholic Lay Bloggers 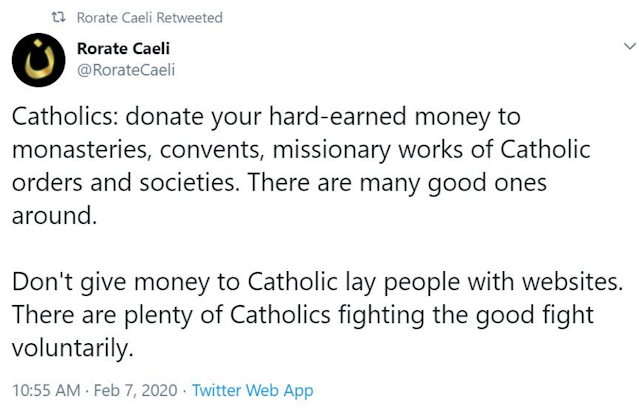 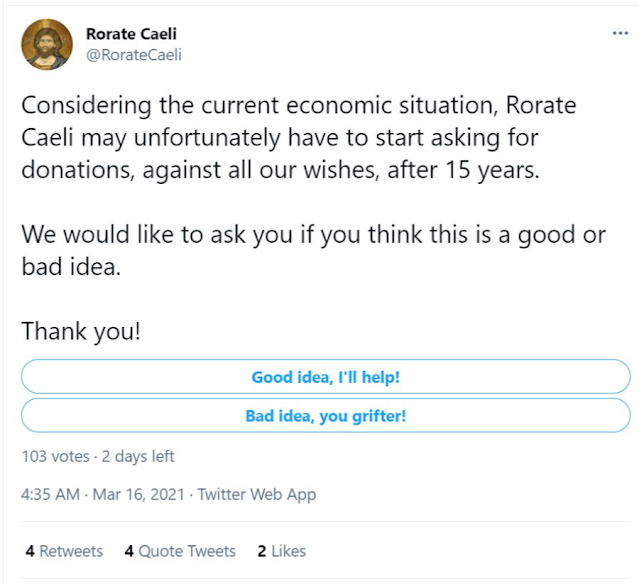 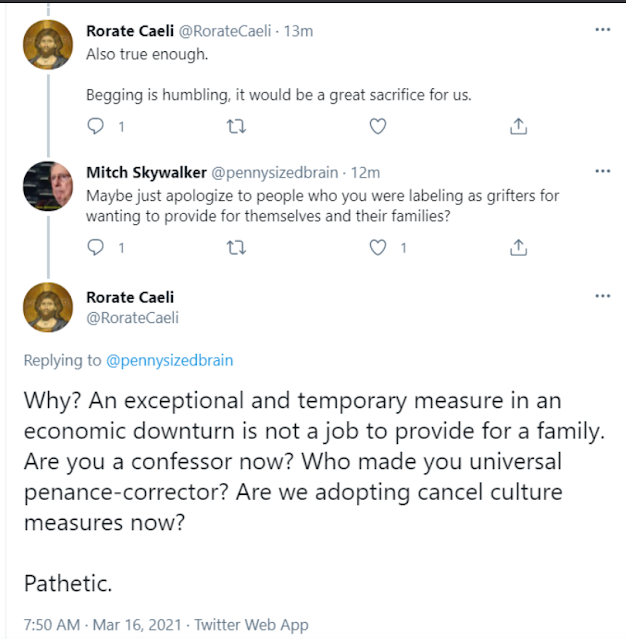 What's pathetic is that the folks at Rorate Caeli don't use their reason or tools readily available to them to earn some much need funds.
Why doesn't Rorate Caeli  open an on-line trading account for a miniual amount of money? Lets say $1,400. and Buy some ETF's let's say SQQQ or SDOW
Lets say Rorate Caeli buys (today 17 MARCH 2021) 100 shares of SQQQ (Bearish - Betting that  the Stock Market will go down) Cost $1,324.00 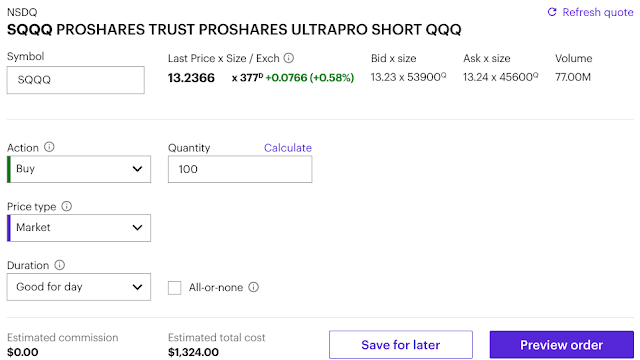 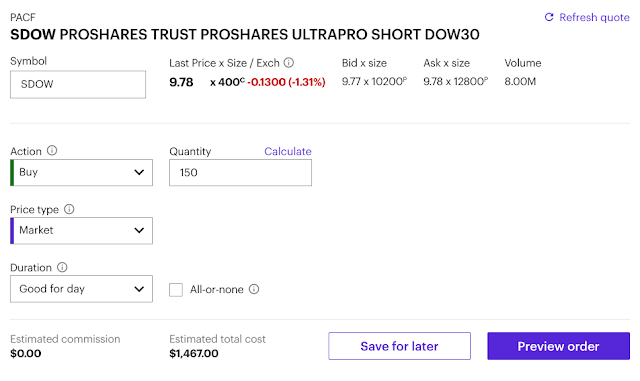 I will post on how much Rorate Caeli would have made (or lost) by the end of March.
Aristotle Politics on a Pagan Philosopher named Thales Miletus who used his reason to supply for his needs and didn't have to beg from others.
Thales Miletus
Works have been written upon these subjects by various persons; for example, by Chares the Parian, and Apollodorus the Lemnian, who have treated of Tillage and Planting, while others have treated of other branches; any one who cares for such matters may refer to their writings. It would be well also to collect the scattered stories of the ways in which individuals have succeeded in amassing a fortune; for all this is useful to persons who value the art of getting wealth. There is the anecdote of Thales the Milesian and his financial device, which involves a principle of universal application, but is attributed to him on account of his reputation for wisdom. He was reproached for his poverty, which was supposed to show that philosophy was of no use. According to the story, he knew by his skill in the stars while it was yet winter that there would be a great harvest of olives in the coming year; so, having a little money, he gave deposits for the use of all the olive-presses in Chios and Miletus, which he hired at a low price because no one bid against him. When the harvest-time came, and many were wanted all at once and of a sudden, he let them out at any rate which he pleased, and made a quantity of money. Thus he showed the world that philosophers can easily be rich if they like, but that their ambition is of another sort. He is supposed to have given a striking proof of his wisdom, but, as I was saying, his device for getting wealth is of universal application, and is nothing but the creation of a monopoly. It is an art often practiced by cities when they are want of money; they make a monopoly of provisions.
There was a man of Sicily, who, having money deposited with him, bought up an the iron from the iron mines; afterwards, when the merchants from their various markets came to buy, he was the only seller, and without much increasing the price he gained 200 per cent. Which when Dionysius heard, he told him that he might take away his money, but that he must not remain at Syracuse, for he thought that the man had discovered a way of making money which was injurious to his own interests. He made the same discovery as Thales; they both contrived to create a monopoly for themselves. And statesmen as well ought to know these things; for a state is often as much in want of money and of such devices for obtaining it as a household, or even more so; hence some public men devote themselves entirely to finance. Source