Happy 515
Know that the vessel which the serpent broke
was and is not; but he whose fault it is
may rest assured-God's vengeance fears no hindrance.
The eagle that had left its plumes within
the chariot, which then became a monster
and then a prey, will not forever be
without an heir; for I can plainly see,
and thus I tell it: stars already close
at hand, which can't be blocked or checked, will bring
a time in which, dispatched by God, a Five
Hundred and Ten and Five will slay the whore
together with that giant who sins with her.
And what I tell, as dark as Sphinx and Themis,
may leave you less convinced because-like these-
it tires the intellect with quandaries;
but soon events themselves will be the Naiads
that clarify this obstinate enigma-
but without injury to grain or herds.
Take note; and even as I speak these words,
do you transmit them in your turn to those
who live the life that is a race to death.
And when you write them, keep in mind that you
must not conceal what you've seen of the tree
that now has been despoiled twice over here.
Whoever robs or rends that tree offends,
with his blaspheming action, God; for He
created it for His sole use-holy.
For tasting of that tree, the first soul waited
five thousand years and more in grief and longing
for Him who on Himself avenged that taste.
Purgatorio XXXIII
Following up post: Posted by dxv515 May 15, 2020 HAPPY 515! DANTE'S 515 & BENEDICT'S PARAGRAPH 67
Sending messages back and forth......
Swiss Guards celebrate 515 years
It was Pope Julius II that founded the Swiss Guards in 1506. Often dubbed as "the world's smallest army", the Swiss guards - a separate entity to the Swiss Armed Forces - are hired by the Roman Catholic Church, under the leadership of the pope, to whom they swear loyalty in a ceremony at the Belvedere Court in the Vatican.
This ceremony takes place every year on 6 May - to mark the anniversary of the Sack of Rome in 1527, in which over 150 Swiss Guards were killed defending Pope Clement VII - who escaped to neighbouring Castel Sant'Angelo, escorted by the remaining 22 guards.
Why Swiss?
It is said that during the Middle Ages, Switzerland gained a reputation for having the most reliable mercenaries in Europe. Then Pope, Julius II, who had long admired the Swiss soldiers who defended the King of France, requested 200 Swiss mercenaries of his own to use as bodyguards and to defend his palaces. After months of marching, 150 swiss guards arrived in Rome on 21 January, 1506 to serve the Pope.
Swiss guards today
In 2015 the contingent was made bigger, from 110 guards to 135 to meet requests. Each recruit is required to complete, first of all, military training in Switzerland. This is followed by a five-week induction training course in Rome, and finally a period dedicated to training to use the primary weapons that the mercenaries used in the 16th century. After this, the guards are sworn in and their families are invited to a private audience with the Pope.
Along with the Pontifical Gendarmerie, the Swiss Guards are responsible for ensuring the safety of the Pope both within and outside the Vatican and for accompanying Pope Francis as he moves around among the people. Source 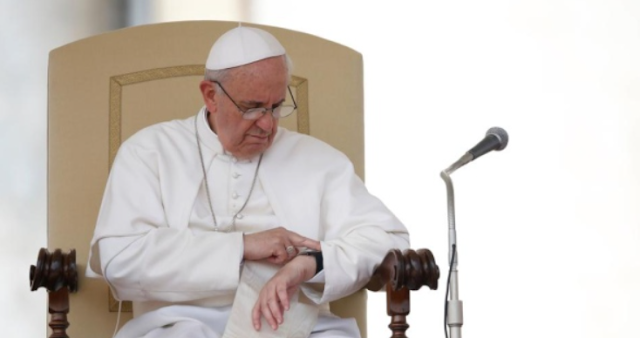