Rad Trads And Rad Trad Influencers Claim The Pope Possesses Both The Spiritual Sword And The Temporal Sword....So Pope Francis Can Use The Temporal Sword To Build Back Better And Implement The Great Reset??....LOL!

Then said he unto them: But now he that hath a purse, let him take it, and likewise a scrip; and he that hath not, let him sell his coat, and buy a sword. For I say to you, that this that is written must yet be fulfilled in me: And with the wicked was he reckoned. For the things concerning me have an end. [38] But they said: Lord, behold here are two swords. And he said to them, It is enough. LK.22.

For those who do not remember and those who choose to forget Rad Trads and Rad Trad Influencers always claimed that the Pope possessed the two swords. They have been doing this for the last 30 years or so. Claiming that the Pope has Two Swords - Spiritual and Temporal. Up until the time of Pope Francis was elected as Pope. Now Rad Trads act as if Pope Francis doesn't possess the Temporal Sword.

If you have two swords

Both of which are material swords.

How can one sword be spiritual? Especially if its material?

It can't be spiritual. There is no such thing. You can't hold a spiritual sword in one hand and a material sword in the other hand and then tell Christ - here are two swords....what?

Can you see a spiritual sword?

This response was presented to us by Dante and Ockham.

Both authors the Rad Trads and the Rad Trad influences ignore. They hate Dante and they hate Ockham.

So now we have Pope Francis who possesses both the Spiritual and Temporal swords claiming that we can Build Back Better and implement the Great Reset.... 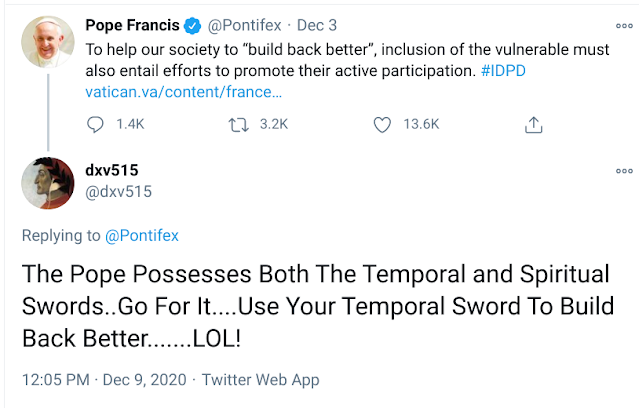 Rad Trads and their influences are having a crisis over Pope Francis and his use of the Temporal Sword to Build Back Better and implement the Great Reset...

Hey morons...maybe the Pope doesn't have possession of the Temporal sword?

You have all gone full retard...