Pope Francis Names America's 1st Black Cardinal
Catholics in the United States will get their first African-American cardinal next month. In a surprise announcement Sunday from his window overlooking St. Peter's Square, Pope Francis named Wilton Gregory, the archbishop of Washington, D.C., among 13 new cardinals. Gregory will be elevated to the position in a ceremony at the Vatican on Nov. 28. "With a very grateful and humble heart, I thank Pope Francis for this appointment which will allow me to work more closely with him in caring for Christ's Church," Gregory said in a statement. Gregory, 72, has served in many high-profile positions within the church. When he was elected president of the U.S. Conference of Catholic Bishops in 2001, he became the first African-American to hold the office. At the time, he said he considered his election "an expression of the love of the Catholic Church for people of color," adding that he hoped it would inspire those Black people who are "lukewarm in their faith" to renew their commitment to the church. Source 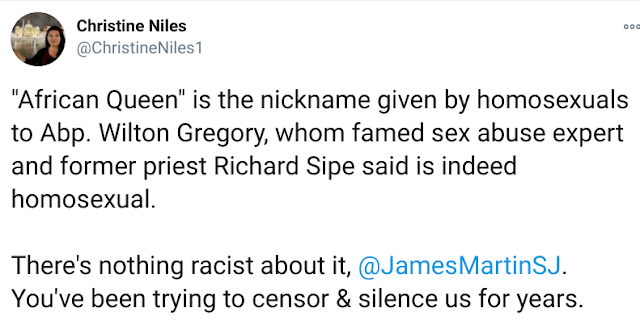 What nickname should we give to this cape/mask wearing Sodomite?

Join us TONIGHT for the second Presidential debate!