Black Woman On A Detroit Flight Becomes Demonically Possessed Flying In The Habitat Of Demons At 35,000 ft....Climbs The Cabin Shirking Yelling Blasphemies....TOLDYA.... 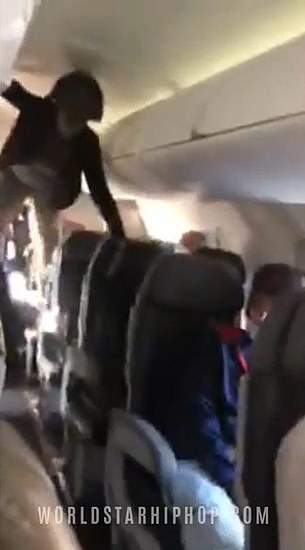 “When the Angels had sinned, and for their transgression were expelled the heavenly abodes; a large part of them were thrust ‘ into hell, called the abyss, and confined there: others of them were suffered to dwell near the moon, and in the region of the air, below the moon, and near our earth.” Eusebius of Caesarea

“The demons of the air together with the Antichrist will perform great wonders on earth and in the atmosphere, and men will become more and more perverted. Our Lady of La Salette 19 Sept. 1846 (Published by Mélanie 1879)

“May the Pope guard against the performers of miracles. For the time has come when the most astonishing wonders will take place on the earth and in the air. Our Lady of La Salette 19 Sept. 1846 (Published by Mélanie 1879)
Woman's 'demonic' meltdown on Detroit flight gets compared to the Exorcist as she climbs the cabin while swearing profusely
This is the shocking moment a woman on a flight to Michigan appeared to have a meltdown in the air.  Video filmed by a fellow passenger shows the woman screaming as she climbs the seats – many of which are empty between rows of travelers.  The distressed passenger appears with her surgical face mask pulled down on her chin as she yells profanities at the top of her lungs.  A cabin crew member asks her to take her seat but stands in shock after she's ignored. At one point, the woman wearing casual joggers and a jacket, clings onto the top of the overheard cabin bins containing hand luggage and shouts, 'We're going to f*** all night b***h,' repeatedly. She does not appear to be speaking to anyone in particular and she stands on the arm and neck rests to project her statements to the rest of the plane.  Throughout, the woman is seen using the tops of the overhead bins to gain leverage and thrust her hips forward.At one time she beats on the lockers, prompting the latches to come undone and the containers to open. Some items partially fall out.  At that point three men slowly move forward to usher her to the front, 'Are you ready to go?' one asks?  While she seems to calm initially, she begins to yell again as they move away from the camera and their actions are no longer clear. Source 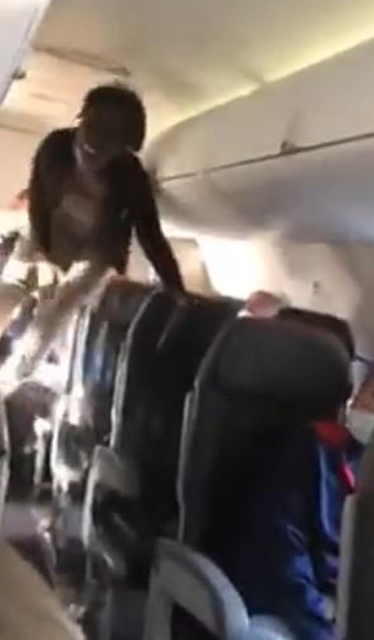 Here read from St. Thomas Aquinas on where Demons reside...