Cathedral Organ
Before And After
18 JULY 2020

The Church will yield to large persecution, a time of darkness and the Church will witness a frightful crisis. Our Lady of La Salette 19 Sept. 1846 (Published by Mélanie 1879)

Probably because a Muslim didn't set the blaze.

Authorities must already know who set the blaze. PARIS — A fire ravaged a 15th-century cathedral in the western French city of Nantes on Saturday, blowing out stained-glass windows and destroying a grand organ.

French officials said they suspected arson was behind the blaze at the Cathédrale Saint-Pierre-et-Saint-Paul de Nantes or Cathedral of St. Peter and St. Paul of Nantes.

Prosecutor Pierre Sennes told reporters three fires had been started at the ancient site and authorities were treating the incident as a criminal act. He gave no further details.

The blaze began early Saturday morning around 7.45 a.m. local time (2:45 a.m. ET), engulfing the inside of the church with massive flames.

More than 100 firefighters battled for several hours to bring it under control and smoke was still coming out of the Gothic structure on Saturday afternoon, local time.

Prime Minister Jean Castex is set to visit the scene along with France's culture and interior ministers.

"I want to know what happened even if it's very early," Castex told reporters.

The fire comes just over a year after a massive fire at the historic Notre-Dame Cathedral in Paris, which destroyed its roof and main spire.

"After Notre-Dame, the St. Peter and St. Paul Cathedral is in flames," President Emmanuel Macron tweeted from Brussels, where he was attending a European Union summit. "Support to the firemen who are taking all the risks to save the Gothic jewel."

The fire broke out behind the grand organ, which was completely destroyed, local fire chief Laurent Ferlay told reporters in front of the cathedral. However, the damage was not as bad as initially feared.

French prosecutors said they had opened an arson inquiry after fire damaged a cathedral in the city of Nantes on Saturday, noting the blaze had erupted in “three separate places”.

“An arson investigation has been opened, there are no conclusions to be drawn now because we have a lot of investigations to make which could introduce new elements,” Nantes prosecutor Pierre Sennes told AFP.

The fire erupted on Saturday morning inside the gothic cathedral in the western city, destroying the organ, but firefighters brought the blaze under control within hours.

Officials said the cathedral’s organ was destroyed and its platform could collapse, but added that the damage was not comparable to last year’s fire at Notre-Dame Cathedral in Paris.

Fire crews were alerted just before 08:00am local time to the blaze at the Cathedral of St Peter and St Paul and around 100 personnel rushed to the scene.

Prime Minister Jean Castex said he would visit the scene later on Saturday. “I want to know what happened but first I’m going to show my solidarity with the people of Nantes,” Castex told reporters. President Emmanuel Macron tweeted his “support for our firefighters who are taking all the risks to save this gothic jewel”.

The building was last hit by fire in 1972. Its roof took more than 13 years to repair.

Another religious building in Nantes — the Basilica of St Donatian and St Rogatian — was struck by a fire in 2015 that destroyed three-quarters of its roof. 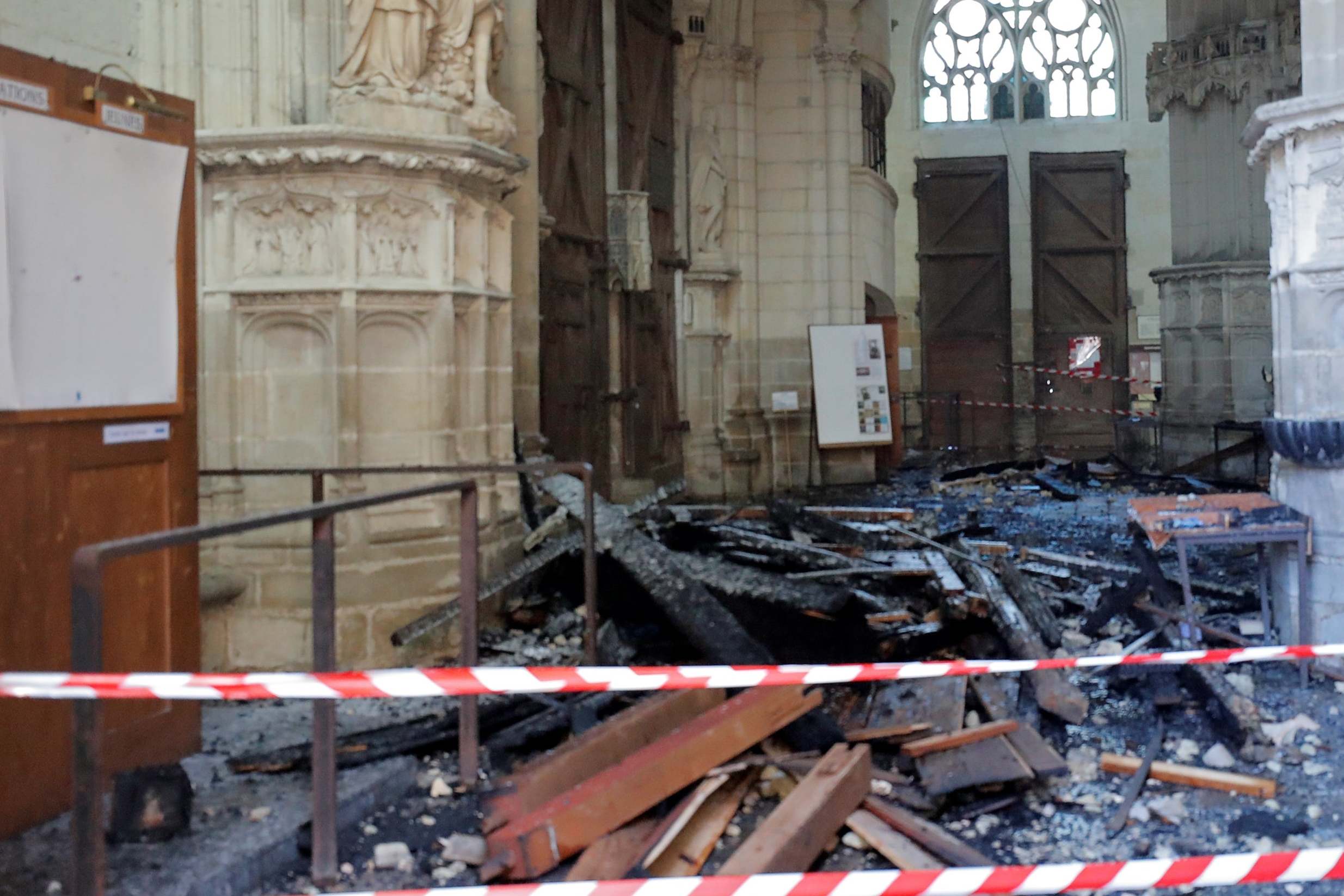