1. Pope Francis just prayed for the victims in the Mexico earthquake see here
2. Massive Sahara Desert Dust Plume should hit the US and Mexico with Nine days......

A massive plume of dust from the Sahara desert in northern Africa has been traversing the atmosphere, thousands of feet above the tropical Atlantic Ocean, and is now cloaking the Caribbean and closing in on the southeastern United States.

While summer dust plumes are a common occurrence, this appears to be one of the most extreme in recent memory. It's so large it has been nicknamed the Gorilla Dust Cloud.

"This is the most significant event in the past 50 years. Conditions are dangerous in many Caribbean islands," Pablo Méndez Lázaro, from the University of Puerto Rico's School of Public Health, told the Associated Press.

On satellite images from space, dust typically appears somewhat subtle and faint, but this plume can be seen as clear as day. The picture below was taken on Sunday from the International Space Station. "We flew over this Saharan dust plume today in the west central Atlantic. Amazing how large an area it covers!" astronaut Doug Hurley tweeted.

These plumes of Saharan dust, termed Saharan Air Layer (SAL) by meteorologists, are whipped up by strong wind storms crossing the Sahara desert. The dust enters the Atlantic Ocean near the Cape Verde islands, inside the Intertropical Convergence Zone where tropical systems often get their start.

NOAA's GOES satellite captured this series of animating images on Friday as the dust entered the deep tropical Atlantic from Africa.

The dust hitches a ride along the trade winds, a belt of east-to-west moving winds near the equator which become firmly established during summertime. The dust layer can extend from a few thousand feet above the surface to 20,000 feet up.

While the dust masses often stay generally intact during most of the trans-Atlantic journey, they typically become diffuse and diluted by the time they reach the Caribbean. However, so far, this particular dust layer is defying the odds. Source 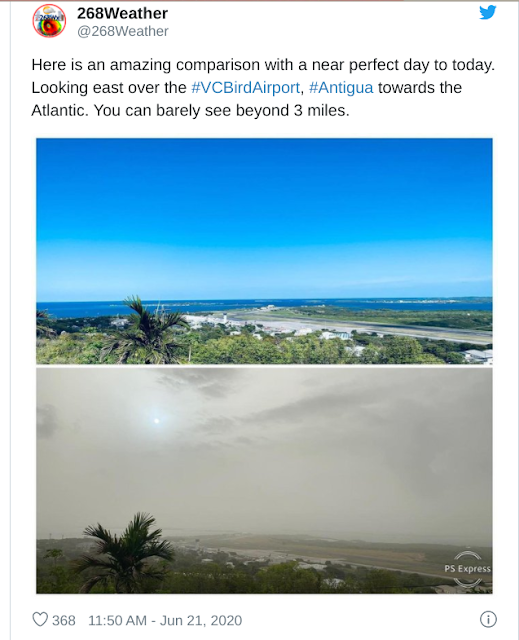 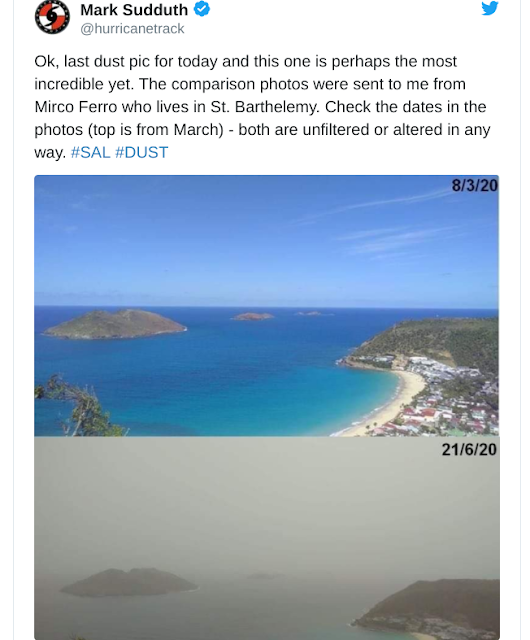