God Took Vengeance On These 18 Italian Priests For Hoarding The Sacraments And Refusing To Help The People.... 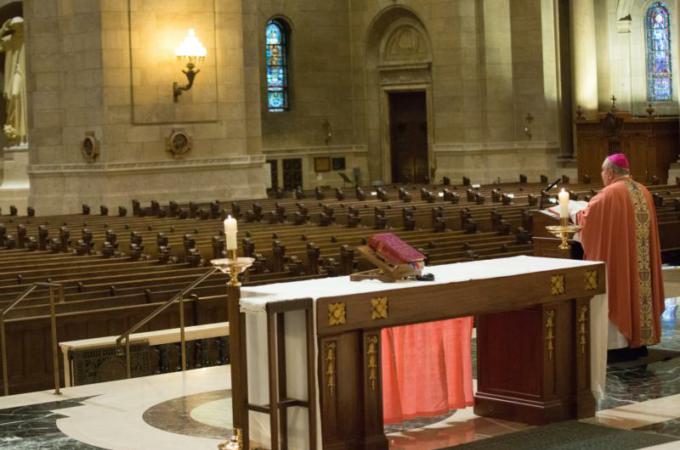 “Italy will be punished for her ambition in wanting to shake off the yoke of the Lord of Lords. And so she will be left to fight a war; blood will flow on all sides. Churches will be locked up or desecrated. Priests and religious orders will be hunted down, and made to die a cruel death. Several will abandon the faith, and a great number of priests and members of religious orders will break away from the true religion; among these people there will even be bishops. Our Lady of La Salette 19 Sept. 1846 (Published by Mélanie 1879)

These 18 dead priests are priests who said the new mass.

The Priests who say the Latin Mass are not exempt.

At least we all see what kind of men these Priests truly are.

At least 18 priests are killed by coronavirus in Italy

At least 18 priests have died of coronavirus in Italy, where clergymen are exposing themselves to the illness by comforting sick patients.

The Pope has encouraged Catholic priests to 'have the courage to go out and go to the sick people', but their visits to intensive care units have brought them into contact with some of the most serious virus cases.

At least 10 priests have died of Covid-19 in the diocese of Bergamo near Milan, according to Catholic newspaper Avvenire.

Another five deaths were registered in the city of Parma, while other cases have emerged in Brescia, Cremona and Milan, all in northern Italy.

The deaths, whether of priests or members of their communities, are 'so numerous that it is difficult to count', the Catholic newspaper wrote.

They are also known to congregate among themselves in close quarters, creating the perfect conditions for contagion.

The 10 deaths in Bergamo, five in Parma and three other reported cases mean the clerical death toll is at least 18. For comparison, a count by Italy's ANSA news agency on Thursday put the number of medics killed by the disease at 13.

'Dressed in a mask, a cap, gloves, a robe and protective glasses, we priests walk around the halls like zombies,' Father Claudio del Monte told Italy's Adnkronos news agency. Source