THE 2 POPES By MARCO TOSATTI: Good Morning Everybody This Is The Era Of The TWO POPES ~ Signed Mélanie

Dear friends and enemies of Stilum Curiae, a previous article has created a lot of discussion on the web especially in the United States. It was an article dedicated to the unique situation we are experiencing. Two popes live together in the Vatican. During the discussion I recommended reading a very interesting article that appeared in Duc in Altum, the blog of Aldo Maria Valli, written by Prof. Silvio Brachetta. I translated it into English for those who could not read Italian. Enjoy reading it.

Massimo Franco, in Corriere della Sera on 8th February, supported the idea of an end of the “era of the two Popes”, in the sense that, in his opinion, something broke between Ratzinger and Bergoglio, after the publication of Robert Sarah’s book together with Benedict XVI. But did there really exist an “era of the two Popes”? You wouldn’t say so. The “era of the two Popes” has always been something refined, artificial, studied at the table. It was and it is an imposed situation, not justified by any reference to apostolic tradition or Scripture or to some theology; not explained, except in a chained and twisted way.

The “era of the two Popes” consists only in a series of photographs, in which the protagonists show affection and goodness. A simple operation of façade, no more than that of the broom that moves the dust under the carpet.

Theology is clarity. If it is not clear, not only is it useless, it is harmful. Theology is that screen of darkened glass that is placed before Scripture – the fathers say somewhere – to soften the too much glow of the Word of God, blinding as the sun at noon. But if the screen, instead of being made of glass, is an opaque body, the light of the Word is extinguished and nothing is seen.

Archbishop Georg Gänswein, in his time (in 2016), to justify the coexistence of a Pope and an Emeritus Pope, had tried to formulate what could be called the “theory of the enlarged ministry”. According to this theory, the papacy could also envisage the Pope Emeritus, “contemplative member” alongside the “active member”, who would be the elected Pope. On what basis does the theory stand? On what page of Scripture? On what authority of the doctors or fathers of the Church? Gänswein, evidently, does not answer, since he cannot answer. And he can’t answer because there’s nothing to say or to prove, since it’s a hypothesis that has been worked out at the table.

When ancient theologians knew something, they said it openly, without excessive and cloying pirouettes. When they didn’t know how to answer, they said, “I don’t know”. The passage from the normal alternation between two pontiffs to the scene is a moment, because if the frankness is replaced by the maneuver, who notices it is not only the Eternal Father, but also the universe world.

Saint Bonaventure, one of the greatest mystics in history, has never had mystical visions, nor has he ever been tormented by demons. His was a completely ordinary mysticism, but enough to be expressed in an extraordinary way, in the unprecedented pages he left us.

In Saint Bonaventure there is not a single collation, a single speculation that has not been demonstrated and clearly written. His word is clear, always supported by Scripture and the fathers – or even by some pagan authority. The Seraphicus has never allowed himself to express opinions without a reference, although he might even have done so, given the greatness of his thought.

The same can be said of Saint Thomas and many other doctors, who have always interpreted the Sacred Text not from private conviction, but from what had been transmitted to him. And, in case nothing had been transmitted on something, nothing they said or wrote, but they humbly recognized their own limit.

Even the Protestant theologians of the twentieth century overcome, in humility, the new incomprehensible theology. When Karl Barth, for example, tears apart the analogy of being and presents his “totally different” God, the error is immediately recognizable. One can point it out, as one indicates a way. Barth makes himself understood, allows debate, his theses can be catalogued and allow a reply.

Behind the Protestant (and non-protestant) concepts of “Weltanschauung”, “demythization”, “criticism of the sources” or “Sitz im Leben”, there may be something chained or a certain artificial mixture between the biblical disciplines and the sociological and historical ones, but there is always something understandable and, therefore, questionable. There is all a speculative work that, almost always, has tried to take into account, if not the apostolic tradition, at least shared scientific discoveries, in the field of archaeology, philology or psychology.

Massimo Franco expresses himself only on the functional quality of the situation in progress. In the background of his article we can see the two protagonists who do not know how to manage a real or presumed “equality of rank”. Everything revolves around external, accidental, a-theological terminologies, far from the substance: “book mess”, “clumsy management”, “already delicate balances”, “recalibrating and redefining boundaries”, “shadow of the predecessor”, “double loyalty”, “lost status”, “watershed in the pontificate”. And with these arguments one would like to come to a conclusion, as if the history of salvation were a hare hunt among drunks.

If an epoch is really over, it is certainly not that of the two Popes, but of those who have always refused to admit that there is the coexistence of two Popes. It is not the end, then, but the beginning of the awareness of an artificial and shattered situation.

It has begun, we hope, the era of the lifting of the carpet and the discovery of how much dust has accumulated underneath it. Source 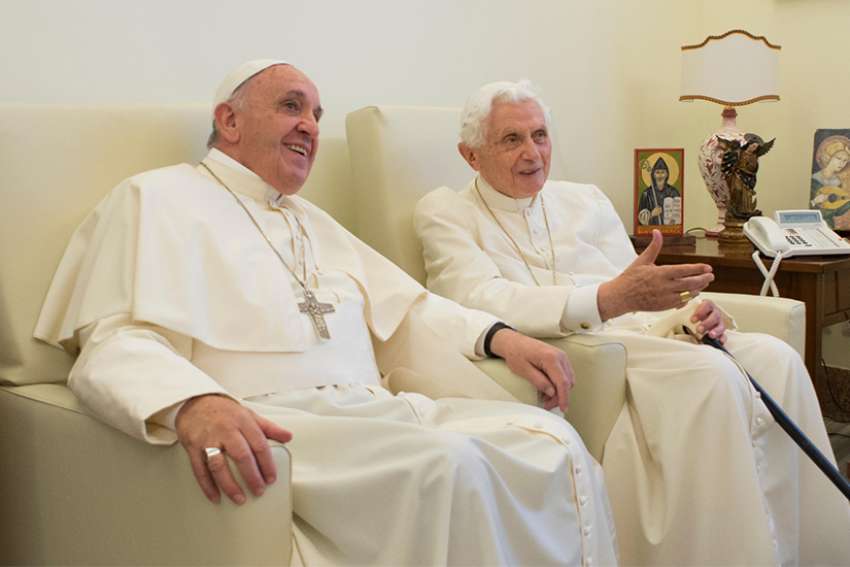