Remember the Rad Trad hysteria over this event?

No Rad Trad conspiracy of Chinese Government crack down on Catholics?

I guess the Asian woman was not babbling about free the Chinese Catholics etc..

Rad Trads got it wrong again....

Apparently this poor Asian woman was a deaf woman who wanted a blessing of sorts..

Here is the article the poor woman who  needed an interpreter.

Pope Francis in January met and shook hands with the woman at whom he lost his patience after being grabbed in St Peter’s Square on December 31. After his general audience on January 8, Pope Francis spoke briefly with the woman. In photos the two can be seen smiling at each other as they shake hands. A priest standing near the woman appears to be acting as interpreter. The two met during what is called the “baciamano,” a time reserved for certain pilgrims to greet the pope following an audience. Francis had apologized during his Angelus address on January 1 for having lost his patience with the woman the night before. “Many times we lose our patience; me too. I apologize for yesterday’s bad example,” he said. While the Pope was greeting the crowd in front of the Vatican nativity scene on December 31, a woman yanked his arm, holding onto his hand. Visibly upset, Pope Francis slapped her hand and walked away frustrated. Source 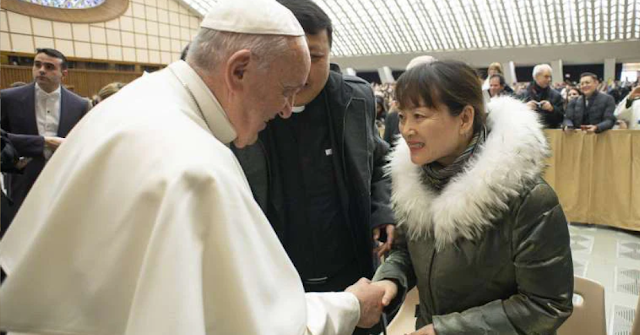 She looks frail and tired in the picture..