Pope Francis is on a six-day trip to Asia, visiting Thailand from 20–23 November, before moving on to Japan from 23–25 November.

The meeting of the two spiritual leaders was held amid the gilded grandeur of Wat Ratchabophit Sathit Maha Simaram, a 19th century Buddhist monastery and temple in central Bangkok, of which the Supreme Patriarch is abbot. After the two were seated before a large golden statue of the Buddha, the Supreme Patriarch noted that Thailand and the Vatican have enjoyed long and warm ties, and as such he welcomed the Pope as an old friend rather than a new acquaintance, saying that he would offer prayers for the pontiff’s continued good health and work.

The supreme patriarch—the official title is Somdet Phra Sangharaja Sakalamahasanghaparinayaka—is the head of the Thai monastic sangha and president ex officio of the Supreme Sangha Council, the administrative body that governs the Thai sangha. The supreme patriarch oversees both of Thailand’s Theravada orders, the Maha Nikaya and the Thammayut Nikaya, as well as the country’s small minority of Mahayana Buddhists. Ven. Somdet Phra Ariyavongsagatanana was appointed as the current supreme patriarch in February 2017. Source

Pope in Thailand: Catholics and Buddhists can live as “good neighbours”

In his address to the Pope, the Buddhist Supreme Patriarch Ariyavongsagatanana IX recalled the historic visit of Pope Saint John Paul II to his predecessor 35 years ago, a meeting at which he had been present. The Patriarch went on to list visits made by the Kings of Thailand to the Popes in the Vatican: to Leo XIII in 1897, Pius XI in 1934, and John XIII in 1960. He spoke of a “deep and lasting friendship”, a “coming together within a true spirit of mutual understanding and equal partnership.”

A journey of esteem

In his address to the Buddhist Supreme Patriarch, the Pope confirmed their meeting was taking place “as part of the journey of esteem and mutual recognition initiated by our predecessors.” Recalling the visit of the seventeenth Supreme Patriarch to Pope Paul VI in the Vatican nearly 50 years ago, Pope Francis said he wanted to “follow in their footsteps in order to increase respect but also friendship between our communities.”

A culture of encounter

Pope Francis said these steps “help testify that the culture of encounter is possible, not only within our communities but also in our world, so prone to creating and spreading conflict and exclusion.” Occasions like this “remind us how important it is for religions to become more and more beacons of hope, as promoters and guarantors of fraternity”, he added.

Pope Francis expressed his gratitude for the fact that, “since the arrival of Christianity in Thailand some four and a half centuries ago, Catholics have enjoyed freedom in religious practice, despite their being in a minority, and for many years have lived in harmony with their Buddhist brothers and sisters.”

The Pope reiterated his personal commitment, and that of the whole Church, “to furthering an open and respectful dialogue in the service of the peace and well-being” of the people of Thailand. He said that through scholarly exchanges, “which lead to greater mutual understanding, as well as the exercise of contemplation, mercy and discernment… we can grow and live together as good neighbours.”

Pope Francis encouraged “the development of new charitable projects”, by members of both religions. These projects should be capable of “generating and multiplying practical initiatives on the path of fraternity, especially with regard to the poor and our much-abused common home”, he said. “In this way, we will contribute to the formation of a culture of compassion, fraternity and encounter”, he concluded, and “this journey will continue to bear fruit in abundance”. Source

Then this about two months later.... 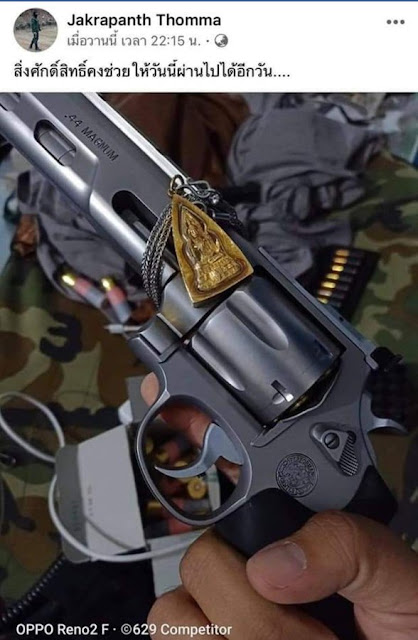 A Thai soldier has gone on a gun rampage inside a shopping mall, killing at least 17 people and taking a dozen hostages while live-streaming the mass murder on Facebook and posing for selfies.  Sergeant Major Jakrapanth Thomma began his murderous rampage this afternoon at his barracks, where he executed his commanding officer along with two other soldiers, before commandeering a humvee and tearing away from the scene.    As he drove along the motorway toward the Terminal 21 shopping mall in Korat, a city 155 miles northeast of Bangkok, Thomma opened fire on civilians along the road.     Reports say the frenzied soldier also sprayed bullets at a Buddhist temple en route to the mall, where he is holed up with hostages as police close in. The gunman posted photos of himself online dressed in full tactical gear and holding a rifle which he smuggled from the army compound's arsenal.   Thomma also wrote several posts on his Facebook page including 'should I surrender' and 'no one can escape death'.  In one Facebook video - since deleted - the assailant filmed from an open jeep saying, 'I'm tired... I can't pull my finger anymore' and making a trigger symbol with his hand.  Thomma also posted a picture of a revolver with the caption: 'It is time to get excited.' Source 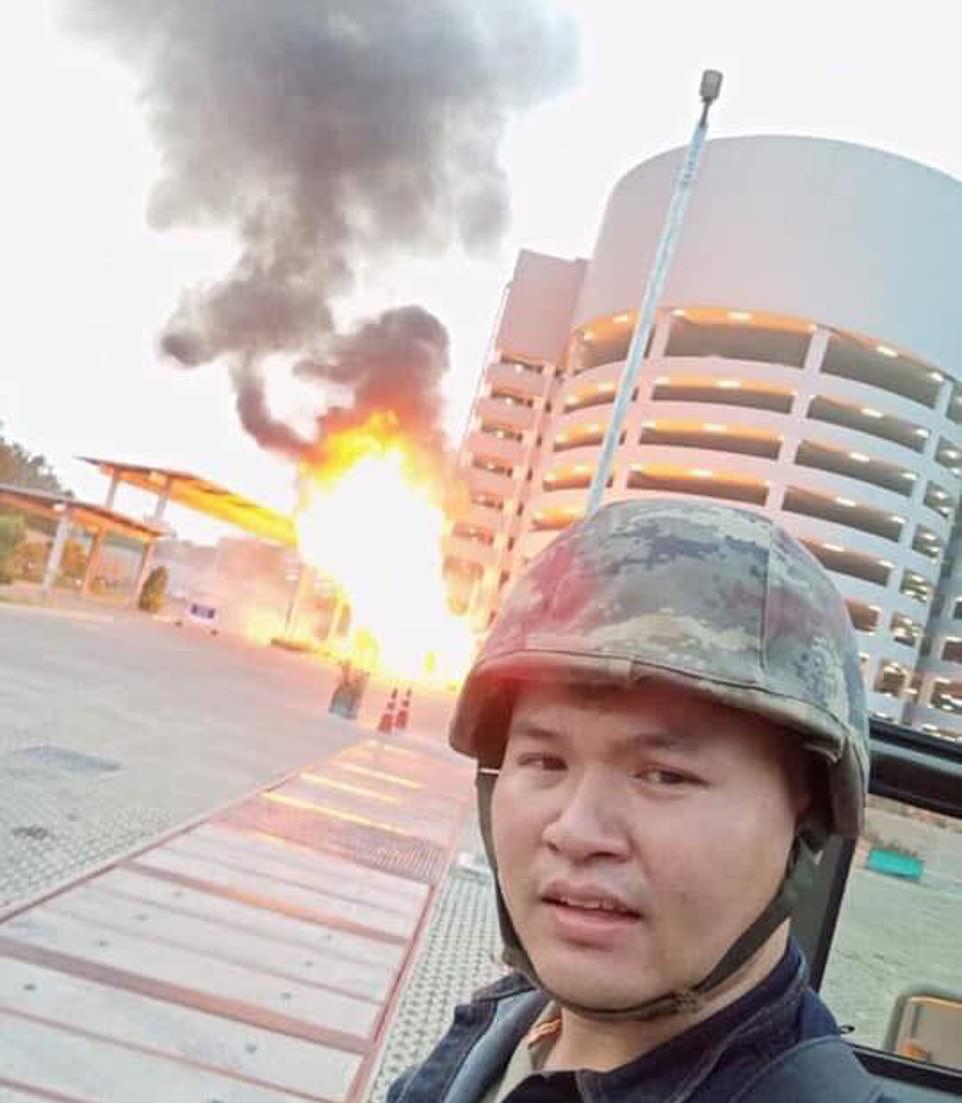 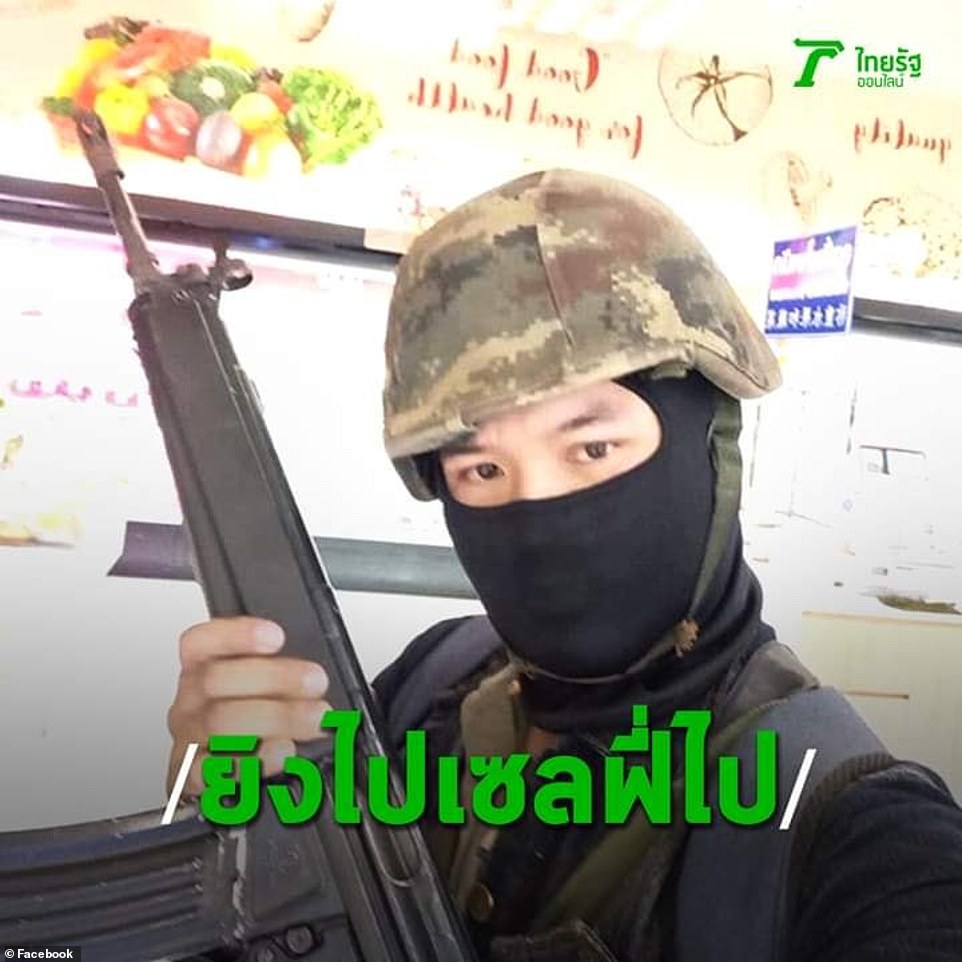 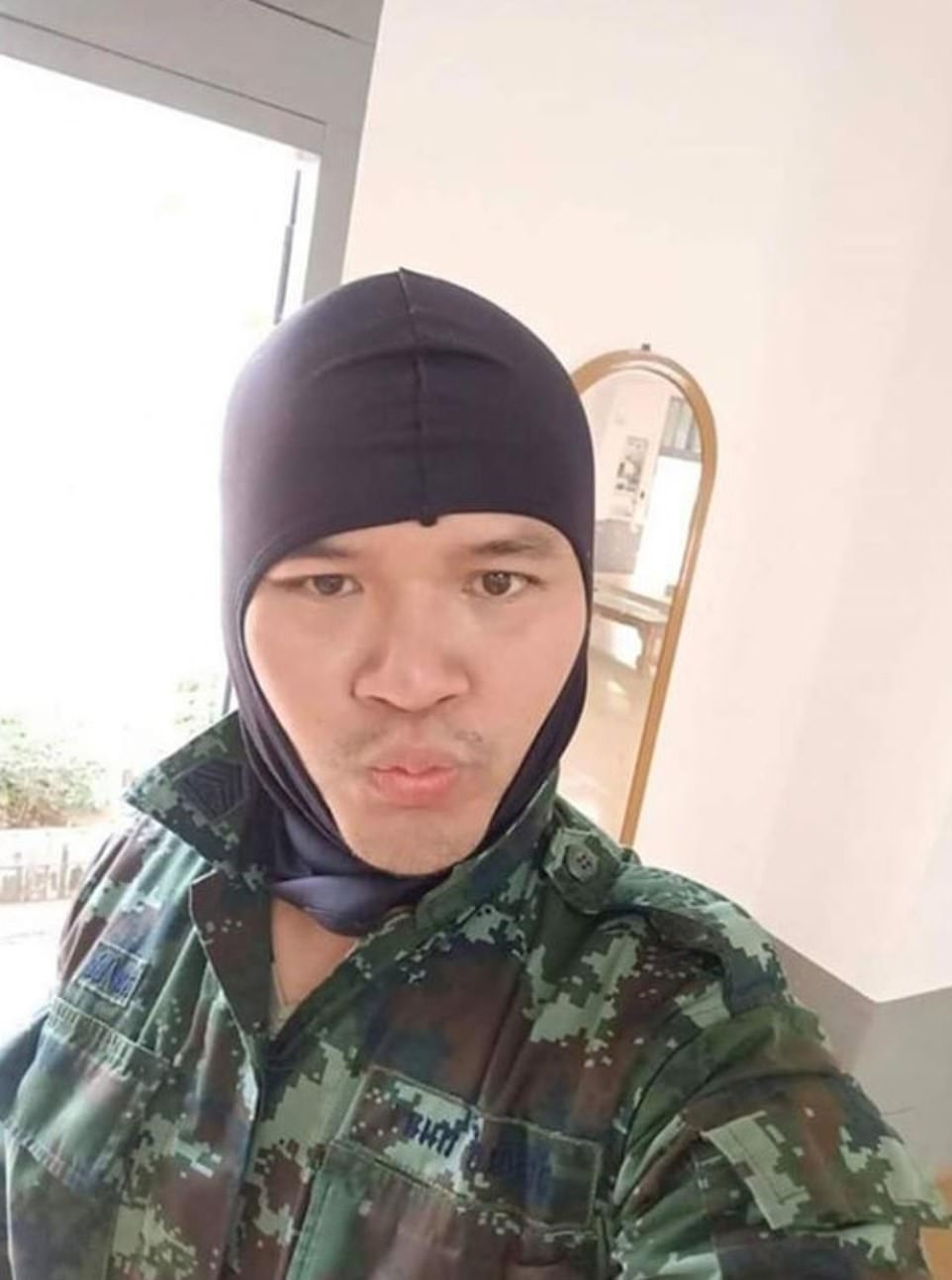 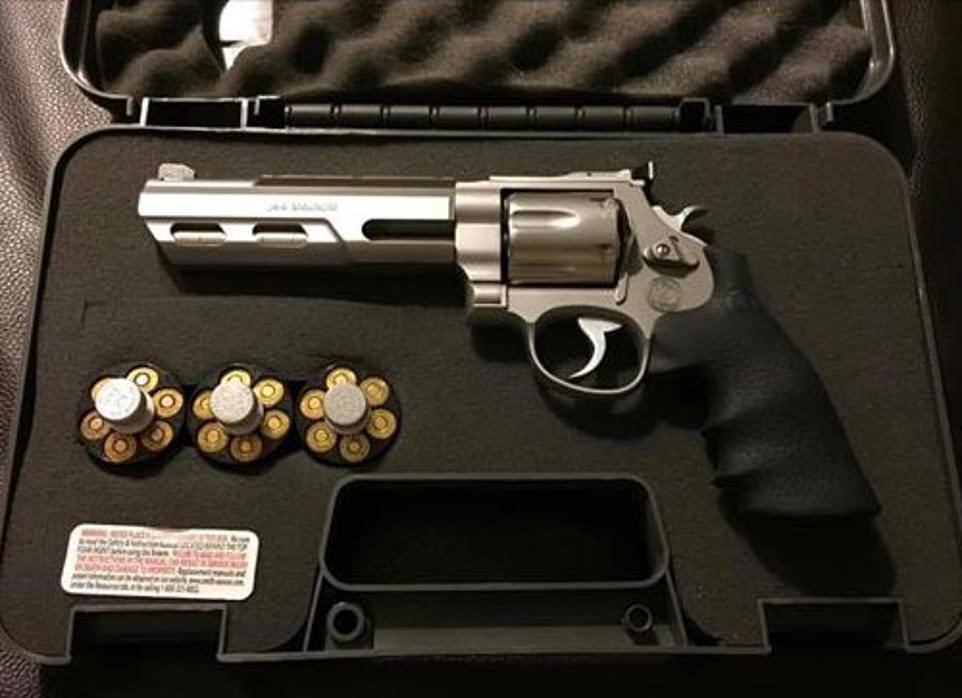 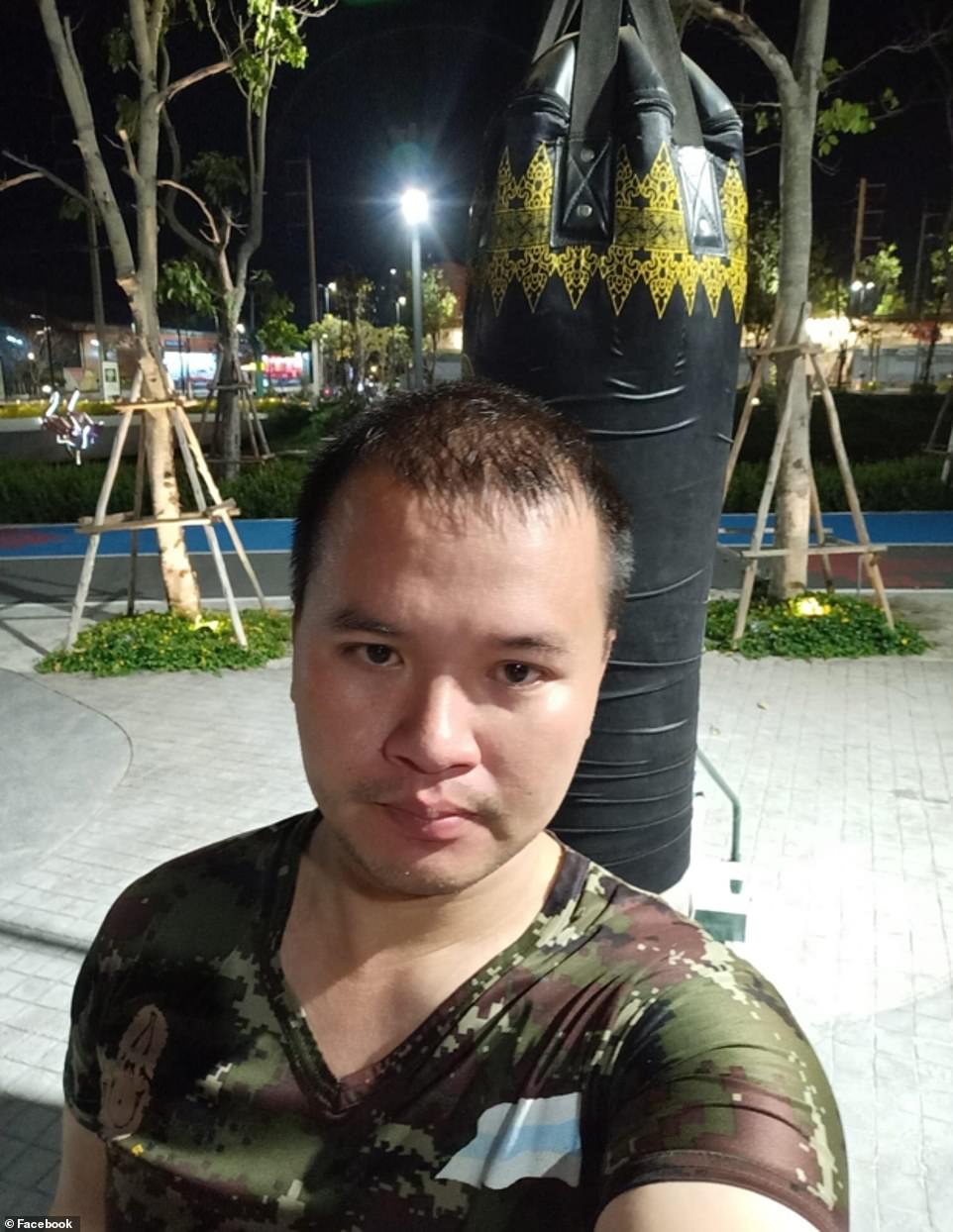 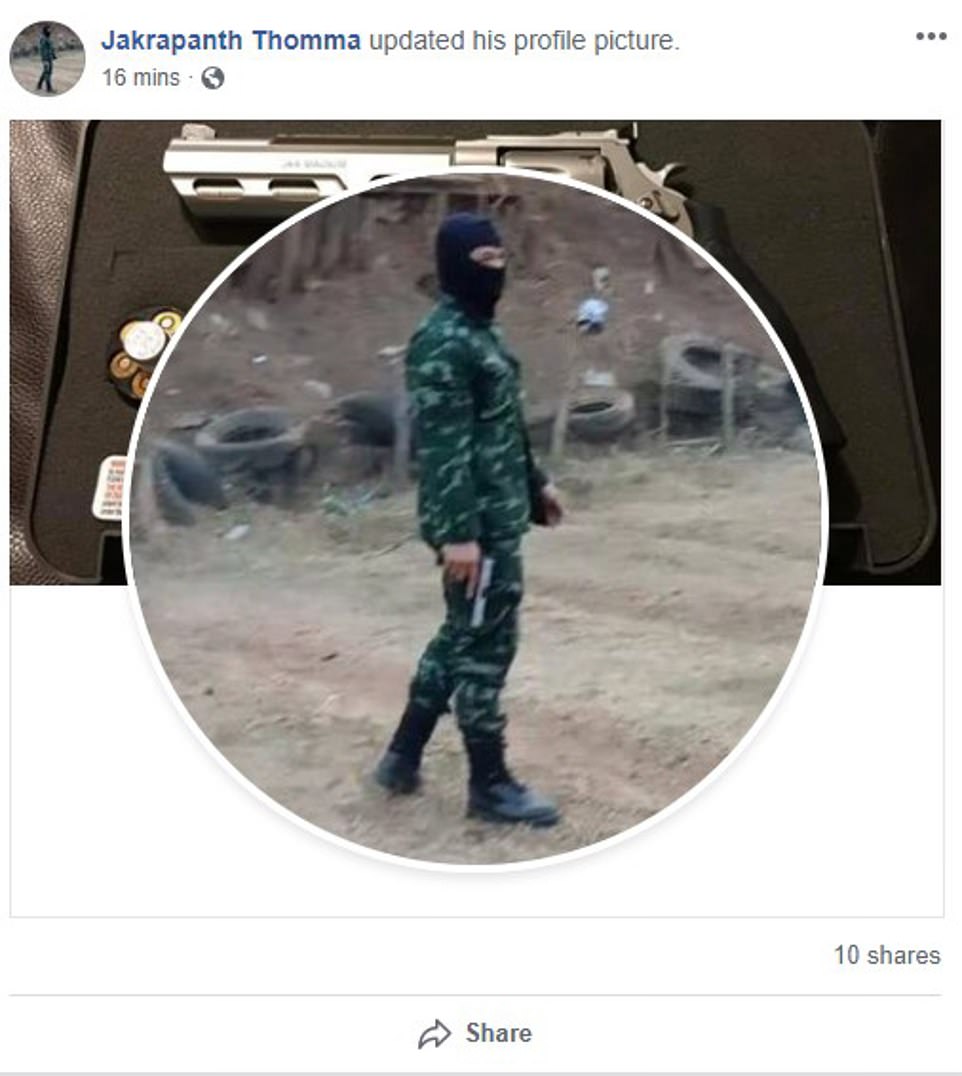 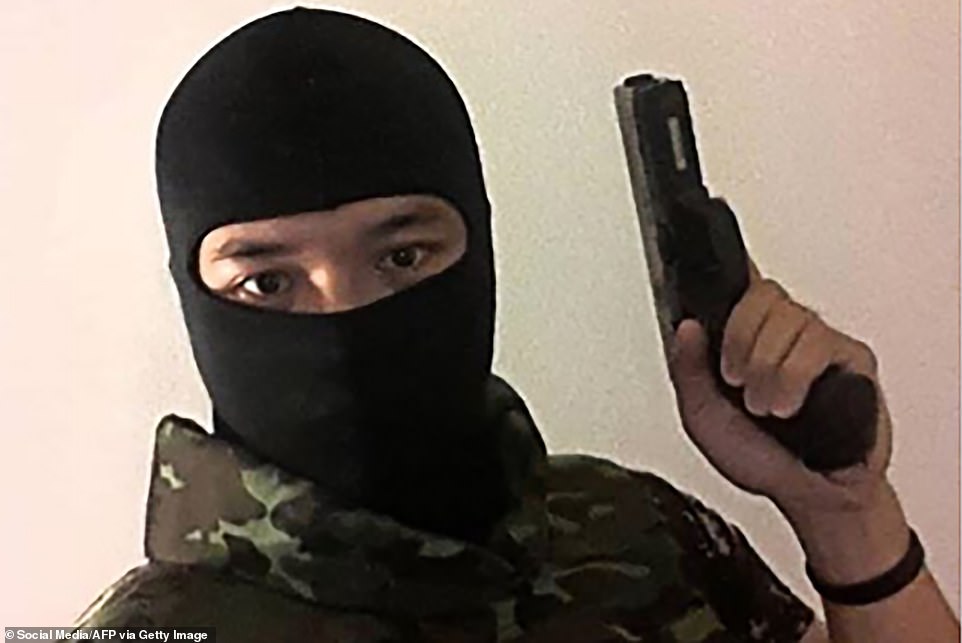