“There will be bloody wars and famines, plagues and infectious diseases.Our Lady of La Salette 19 Sept. 1846 (Published by Mélanie 1879)

“Churches will be locked up or desecrated. Priests and religious orders will be hunted down, and made to die a cruel death. Our Lady of La Salette 19 Sept. 1846 (Published by Mélanie 1879)
It’s Disgraceful That All Mass Are Suspended in Milan - By Dr Geoffrey Brushwood
Milan Archbishop Mario Delpini ordered the suspension of all Masses starting from the evening of Sunday 23 February because of the coronavirus.

As a medical doctor, and as a Catholic, I can say that many saints exposed themselves to horrendous illnesses like the plague and leprosy without hesitation at the service of people.

What would society say if doctors refused to see patients if they are at risk of infection?

Isn’t the Holy Eucharist a medication for our souls and indeed our bodies? Doesn’t Holy Mass bring many graces needed at a time of calamity?

No, this is not an effort to prevent the spreading of an infection. If that were the objective, then all gatherings in public places should be banned.

Travelling in public transport should also be banned, where people are in close proximity for long durations breathing the same air.

This is but an opportunity for demons dressed as bishops and priests and even as government officials to pounce on the opportunity to stop Holy Mass.

They have been tinkering with Holy Mass for decades and abusing the liturgy in any possible way they could justify. Now, they halt the Divine Liturgy entirely, using a false pretext. Source 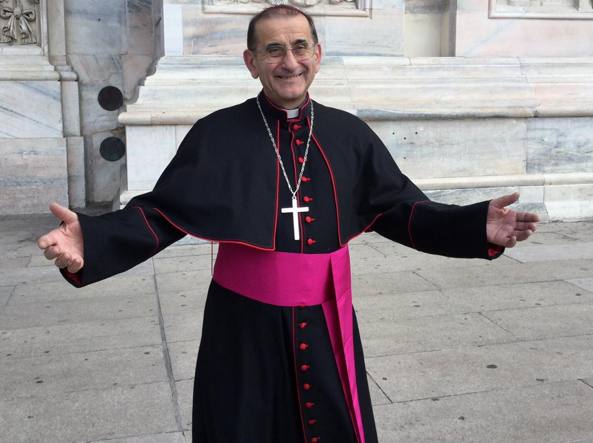 Milan Archbishop Mario Delpini
Heli's sons withdrew men from the Sacrifice:
Now the sons of Heli were children of Belial, not knowing the Lord, Nor the office of the priests to the people: but whosoever had offered a sacrifice, the servant of the priest came, while the flesh was in boiling, with a fleshhook of three teeth in his hand, And thrust it into the kettle, or into the caldron, or into the pot, or into the pan: and all that the fleshhook brought up, the priest took to himself. Thus did they to all Israel that came to Silo. Also before they burnt the fat, the servant of the priest came, and said to the man that sacrificed: Give me flesh to boil for the priest: for I will not take of thee sodden flesh, but raw. And he that sacrificed said to him: Let the fat first be burnt today according to the custom, and then take as much as thy soul desireth. But he answered and said to him: Not so: but thou shalt give it me now, or else I will take it by force. Wherefore the sin of the young men was exceeding great before the Lord: because they withdrew men from the sacrifice of the Lord........
God reveals to Samuel the destruction of Heli and his two sons:
In that day I will raise up against Heli all the things I have spoken concerning his house: I will begin, and I will make an end. For I have foretold unto him, that I will judge his house for ever, for iniquity, because he knew that his sons did wickedly, and did not chastise them. Therefore have I sworn to the house of Heli, that the iniquity of his house shall not be expiated with victims nor offerings for ever