RE-POST: POPE PAUL VI Is The MONSTER Spoken Of By Maximin Of La Salette?

The Mass of Paul "new Order of Mass" promulgated in 1970

‘Afterwards this peace will be disturbed by the monster.’ Pierre Maximin Giraud

‘And the monster will arrive at the end of the nineteenth century or at the latest at the commencement of the twentieth.’  Pierre Maximin Giraud 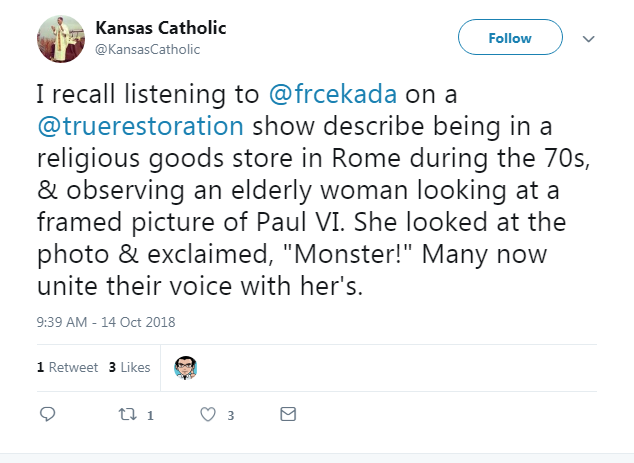 Is Paul VI THE MONSTER?

The above Tweet offers evidence that some back in the  70's knew Pope Paul VI to be a monster.

Paul VI did DESTROY the Holy Sacrifice of the Mass.

There's no question about it.

Look around today at the devastation at any Catholic Church that promotes the New Mass  and ask yourself - is Paul VI a monster for destroying the Holy Sacrifice of the Mass? The answer is yes.

Here are the words from the Pope who Destroyed the Holy Sacrifice of the Mass: 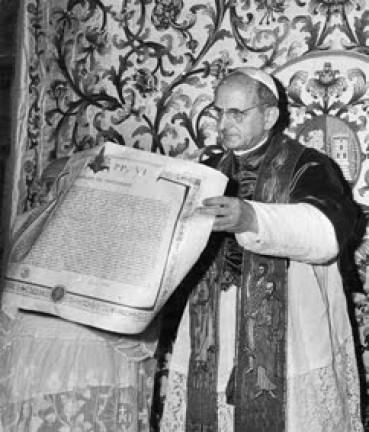 THE MASS IS THE SAME

Our Dear Sons and Daughters:

1. We wish to draw your attention to an event about to occur in the Latin Catholic Church: the introduction of the liturgy of the new rite of the Mass. It will become obligatory in Italian dioceses from the First Sunday of Advent, which this year falls on November 30. The Mass will be celebrated in a rather different manner from that in which we have been accustomed to celebrate it in the last four centuries, from the reign of St. Pius V, after the Council of Trent, down to the present.

2. This change has something astonishing about it, something extraordinary. This is because the Mass is regarded as the traditional and untouchable expression of our religious worship and the authenticity of our faith. We ask ourselves, how could such a change be made? What effect will it have on those who attend Holy Mass? Answers will be given to these questions, and to others like them, arising from this innovation. You will hear the answers in all the Churches. They will be amply repeated there and in all religious publications, in all schools where Christian doctrine is taught. We exhort you to pay attention to them. In that way you will be able to get a clearer and deeper idea of the stupendous and mysterious notion of the Mass.

3. But in this brief and simple discourse We will try only to relieve your minds of the first, spontaneous difficulties which this change arouses. We will do so in relation to the first three questions which immediately occur to mind because of it.

4. How could such a change be made? Answer: It is due to the will expressed by the Ecumenical Council held not long ago. The Council decreed: "The rite of the Mass is to be revised in such a way that the intrinsic nature and purpose of its several parts, as also the connection between them, can be more clearly manifested, and that devout and active participation by the faithful can be more easily accomplished.

5. "For this purpose the rites are to be simplified, while due care is taken to preserve their substance. Elements which, with the passage of time, came to be duplicated, or were added with but little advantage, are now to be discarded. Where opportunity allows or necessity demands, other elements which have suffered injury through accidents of history are now to be restored to the earlier norm of the Holy Fathers" (Sacrosanctum Concilium #50).

6. The reform which is about to be brought into being is therefore a response to an authoritative mandate from the Church. It is an act of obedience. It is an act of coherence of the Church with herself. It is a step forward for her authentic tradition. It is a demonstration of fidelity and vitality, to which we all must give prompt assent.

7. It is not an arbitrary act. It is not a transitory or optional experiment. It is not some dilettante's improvisation. It is a law. It has been thought out by authoritative experts of sacred Liturgy; it has been discussed and meditated upon for a long time. We shall do well to accept it with joyful interest and put it into practice punctually, unanimously and carefully.

8. This reform puts an end to uncertainties, to discussions, to arbitrary abuses. It calls us back to that uniformity of rites and feeling proper to the Catholic Church, the heir and continuation of that first Christian community, which was all "one single heart and a single soul" (Acts 4:32). The choral character of the Church's prayer is one of the strengths of her unity and her catholicity. The change about to be made must not break up that choral character or disturb it. It ought to confirm it and make it resound with a new spirit, the spirit of her youth.

9. The second question is: What exactly are the changes?

10. You will see for yourselves that they consist of many new directions for celebrating the rites. Especially at the beginning, these will call for a certain amount of attention and care. Personal devotion and community sense will make it easy and pleasant to observe these new rules. But keep this clearly in mind: Nothing has been changed of the substance of our traditional Mass. Perhaps some may allow themselves to be carried away by the impression made by some particular ceremony or additional rubric, and thus think that they conceal some alteration or diminution of truths which were acquired by the Catholic faith for ever, and are sanctioned by it. They might come to believe that the equation between the law of prayer, lex orandi and the law of faith, lex credendi, is compromised as a result.

11. It is not so. Absolutely not. Above all, because the rite and the relative rubric are not in themselves a dogmatic definition. Their theological qualification may vary in different degrees according to the liturgical context to which they refer. They are gestures and terms relating to a religious action—experienced and living—of an indescribable mystery of divine presence, not always expressed in a universal way. Only theological criticism can analyze this action and express it in logically satisfying doctrinal formulas. The Mass of the new rite is and remains the same Mass we have always had. If anything, its sameness has been brought out more clearly in some respects.

12. The unity of the Lord's Supper, of the Sacrifice on the cross of the re-presentation and the renewal of both in the Mass, is inviolably affirmed and celebrated in the new rite just as they were in the old. The Mass is and remains the memorial of Christ's Last Supper. At that Supper the Lord changed the bread and wine into His Body and His Blood, and instituted the Sacrifice of the New Testament. He willed that the Sacrifice should be identically renewed by the power of His Priesthood, conferred on the Apostles. Only the manner of offering is different, namely, an unbloody and sacramental manner; and it is offered in perennial memory of Himself, until His final return (cf. De la Taille, Mysterium Fidei, Elucd. IX).

13. In the new rite you will find the relationship between the Liturgy of the Word and the Liturgy of the Eucharist, strictly so called, brought out more clearly, as if the latter were the practical response to the former (cf. Bonyer). You will find how much the assembly of the faithful is called upon to participate in the celebration of the Eucharistic sacrifice, and how in the Mass they are and fully feel themselves "the Church." You will also see other marvelous features of our Mass. But do not think that these things are aimed at altering its genuine and traditional essence.

14. Rather try to see how the Church desires to give greater efficacy to her liturgical message through this new and more expansive liturgical language; how she wishes to bring home the message to each of her faithful, and to the whole body of the People of God, in a more direct and pastoral way.

15. In like manner We reply to the third question: What will be the results of this innovation? The results expected, or rather desired, are that the faithful will participate in the liturgical mystery with more understanding, in a more practical, a more enjoyable and a more sanctifying way. That is, they will hear the Word of God, which lives and echoes down the centuries and in our individual souls; and they will likewise share in the mystical reality of Christ's sacramental and propitiatory sacrifice.

16. So do not let us talk about "the new Mass." Let us rather speak of the "new epoch" in the Church's life.

With Our Apostolic Benediction. 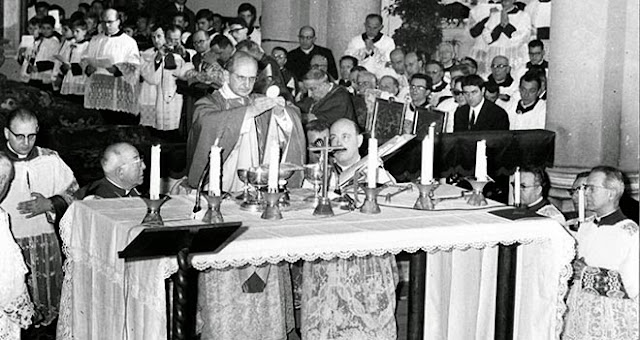