POPE FRANCIS THE FIRST POPE TO DIE IN PLANE CRASH? The Pope Prays At Saint Mary Major For His Trip To BANGKOK-TOKYO-NAGASAKI-HIROSHIMA 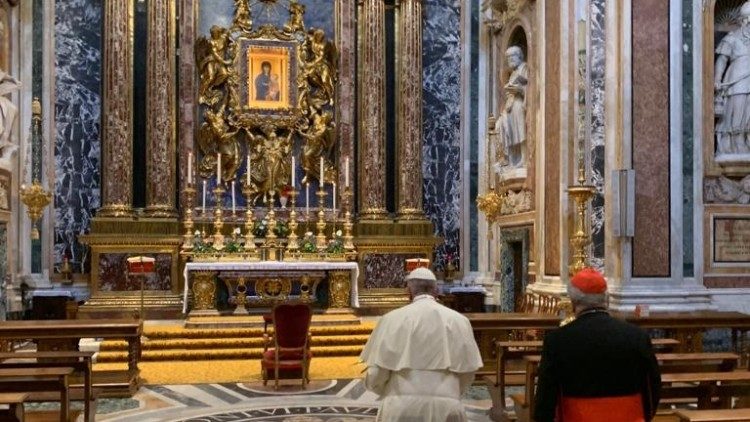 Pope Francis entrusts the Virgin Mary with his apostolic journey that from Tuesday until 26th November will take him to Thailand and Japan.

On the eve of his 32nd apostolic journey to Asia, Pope Francis went this Tuesday morning to the Basilica of Saint Mary Major in Rome to pray before the image of Our Lady Salus Populi Romani. Pope Francis has visited the Basilica many times. The first time was the day after his election as Pope, on March 14, 2013. As has become customary, the Pope visits St. Mary Major before and after his trips abroad.

Homage to Our Lady

Each time he visits, the Pope lays a bouquet of flowers and prays in front of the image of Salus populi romani (Salvation of the Roman people), inside the Borghese chapel in the basilica. In the image of the Virgin Mary with the Child in her arms, the Pope sees the faith of God's people who for centuries have clung to the Virgin Mary in times of need, and to implore a sign of grace from heaven, because "what is impossible for men is not impossible for God.”

The sacred image has always been dear to the Jesuits (Saint Ignatius celebrated his first Mass in St Mary Major) Pius XII paid her homage when he proclaimed the dogma of the Assumption in 1950. The image was displayed at Tor Vergata, in August 2000, on the occasion of World Youth Day and on that occasion Pope John Paul II wanted to entrust it to the young people together with the cross "so that it remains visibly evident that Mary is a most powerful Mother who leads us to Christ". It was John Paul II himself, from the beginning of his pontificate, who wanted a lamp to burn day and night under the image of Salus, as a witness to his great devotion to Our Lady. Source

Update of Pope’s visit to Thailand and Japan

The Holy See Press Office on Monday published an updated version of Pope Francis’ itinerary for his Apostolic Visit to Thailand and Japan in November. The Pope departs from Rome on 19 November; after 3 full days in Thailand he travels to Japan for the second leg of his visit. He is scheduled to return to the Vatican on 26 November.

This is the full programme:

19:00 Departure by plane from Rome Fiumicino Airport for Bangkok

9.00 Welcome Ceremony in the Government House courtyard
9.15 Meeting with the Prime Minister in the "Inner Ivory Room" of the Government House
9.30 Meeting with Authorities, Civil Society and the Diplomatic Corps in the "Inner Santi Maitri" Hall of the Government House
10.00 Visit to the Supreme Buddhist Patriarch at Wat Ratchabophit Sathit Maha Simaram Temple
11.15 Meeting with the medical staff of St. Louis Hospital
12.00 Private visit to infirm and disabled people at St. Louis Hospital Lunch at the Apostolic Nunciature Lunch at the Apostolic Nunciature
17.00 Private visit to His Majesty the King Maha Vajiralongkorn "Rama X" at Amphorn Royal Palace
18.00 Holy Mass in the National Stadium

10.00 Meeting with Priests, Religious, Seminarians and Catechists in St Peter’s Parish
11.00 Meeting with the Bishops of Thailand and FABC at the Blessed Nicholas Boonkerd Kitbamrung Shrine
11.50 Private meeting with the Members of the Society of Jesus in a hall close to the Shrine Lunch at the Apostolic Nunciature
15.20 Meeting with the Leaders of the Christian denominations and Other Religions at Chulalongkorn University
17.00 Holy Mass with Young People in the Cathedral of the Assumption

10.00 Meeting with the victims of Triple Disaster at "Bellesalle Hanzomon" Private visit to Emperor Naruhito at the Imperial Palace
11.45 Meeting with Young People at the Cathedral of Holy Mary Lunch with the Papal Delegation at the Nunciature
16.00 Holy Mass in the Tokyo Dome Meeting with the Prime Minister at Kantei Meeting with Authorities and the Diplomatic Corps at Kantei