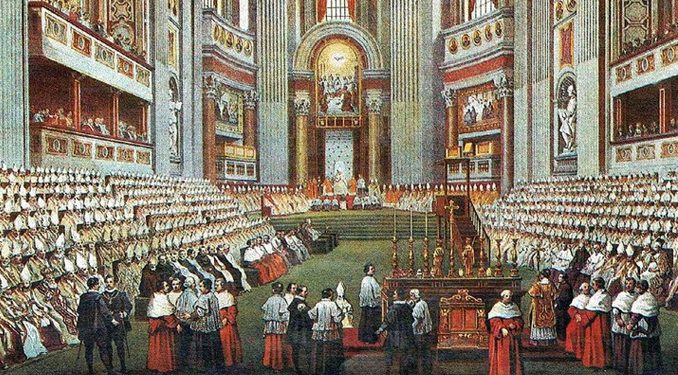 After the First Vatican Council, for example, the last vote, the one on infallibility, a well-sized group left and founded the Old Catholic Church so as to remain “true” to the tradition of the Church. Then they developed differently and now they ordain women Pope Francis

Trads may not ordain women as the rigid Old Catholic did, but will embrace Islam instead..

Secondly, the problem of the schism: within the Church there have been many schisms. After the First Vatican Council, for example, the last vote, the one on infallibility, a well-sized group left and founded the Old Catholic Church so as to remain “true” to the tradition of the Church. Then they developed differently and now they ordain women. But in that moment they were rigid, they rallied behind orthodoxy and thought that the council had erred. Another group left very, very quietly, but they did not want to vote. Vatican II had these things among its consequences. Perhaps the most well-known post-conciliar split is that of Lefebvre. In the Church there is always the option for schism, always. But it is an option that the Lord leaves to human freedom. I am not afraid of schisms, I pray that there will be none, because what is at stake is people’s spiritual health. Let there be dialogue, let there be correction if there is an error, but the schismatic path is not Christian. Let’s think about the beginnings of the Church, how it began with many schisms, one after the other: Arians, Gnostics, Monophysites… An anecdote is coming to mind that I would like to recount: it was the people of God who saved [the Church] from the schisms. The schismatics always have one thing in common: they separate themselves from the people, from the faith of the people of God. And when there was a discussion in the council of Ephesus regarding Mary’s divine maternity, the people – this is history – were at the entrance of the cathedral while the bishops entered to take part in the council. They were there with clubs. They made the bishops see them as they shouted, “Mother of God! Mother of God!”, as if to say: if you do not do this, this is what you can expect… The people of God always correct and help. A schism is always an elitist separation stemming from an ideology detached from doctrine. It is an ideology, perhaps correct, but that engages doctrine and detaches it… And so I pray that schisms do not happen, but I am not afraid of them. This is one of the results of Vatican II, not because of this or that Pope. For example, the social things that I say are the same things that John Paul II said, the same things! I copy him. But they say: the Pope is a communist… Ideologies enter into doctrine and when doctrine slips into ideology that’s where there’s the possibility of a schism. There’s the ideology of the primacy of a sterile morality regarding the morality of the people of God. The pastors must lead their flock between grace and sin, because this is evangelical morality. Instead, a morality based on such a pelagian ideology leads you to rigidity, and today we have many schools of rigidity within the Church, which are not schisms, but pseudo-schismatic Christian developments that will end badly. When you see rigid Christians, bishops, priests, there are problems behind that, not Gospel holiness. So, we need to be gentle with those who are tempted by these attacks, they are going through a tough time, we must accompany them gently.” Source