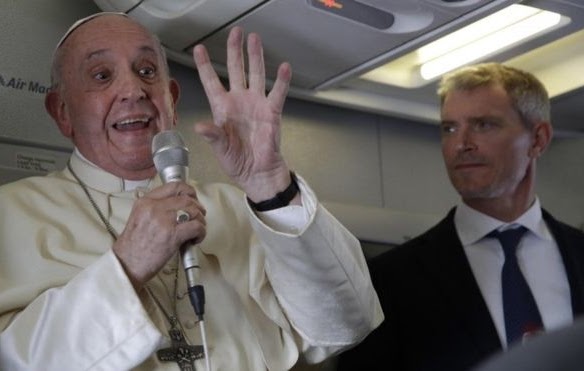 Let’s move on to the trip. One of the themes of this visit was the protection of the environment, of the trees, threatened by deforestation and by fires. In this moment this is happening in the Amazon. Do you think that the governments in that area are doing enough to protect this lung of the world?

“Regarding Africa. I already said on another trip, within the collective unconscious, there is a motto: Africa can be exploited. We would never think: Europe can be exploited. We must free humanity from this collective unconsciousness. The area where the exploitation is strongest is on the environment, with deforestation, the destruction of biodiversity. A couple of months ago, I met with port chaplains and at the audience there were seven young fishermen who fished with a vessel that was no longer than this airplane. They fished with mechanical devices as is done today. They told me: in a few months, we caught 6 tons of plastic…. We have banned plastic in the Vatican, we’re working on it. This is a reality affecting only the oceans. The prayer intention for this month is specifically for the protection of the oceans, that give us the oxygen we breathe. Then there are the great lungs, in Central Africa, the entire Pan-Amazonic basin, and then there are other smaller ones. We need to defend ecology, biodiversity, that is our life; to defend the oxygen, that is our life. It comforts me that carrying this struggle forward are young people who are, who have a tremendous conscience and who say: the future is ours, do what you want with yours, but not with ours! I believe that the Paris Agreement was a good step forward, and then the others as well… These are meetings that help raise awareness. But last year during summer, when I saw that photo of the ship navigating the North Pole like nothing, I felt anguish, and just a little while ago all of us saw the photograph symbolizing a funeral for the glacier in Greeland that no longer exists. …All of this is happening quickly, we must become aware beginning with the little things. Are government leaders doing everything? Some more, others less. It is true that there is a word that I must say which is at the basis of environmental exploitation. I was moved by the article in the Messaggero by Franca [Giansoldati], which did not mince words and which spoke about the destructive, rapacious operations, and this not only in Africa but also in our cities, in our civilisations. And the horrible word is corruption: I need to do this and in order to do it I need to cut down trees in the forest and I need the government’s or the state’s permission. I go to the people responsible – and here I am literally repeating what a Spanish entrepreneur told me – and the question that we hear when we want a project approved is: “How much am I getting out of it?” said brazenly. This happens in Africa, in Latin America and also in Europe. Above all, when someone takes on social or political responsibility for personal gain, values, nature, people are exploited. Africa can be exploited…. But do we think of the many laborers who are exploited in our societies; we have people who recruit and benefit from cheap labor in Europe, the Africans did not invent it. The maid who is paid a third of what she is due was not invented by the Africans. Women deceived and exploited for prostitution in the centers of our cities was not invented by the Africans. Here too there is this type of exploitation, not only environmental, but also human. And this is corrupt. And when corruption is within the heart, get ready, because anything is possible.”  Source 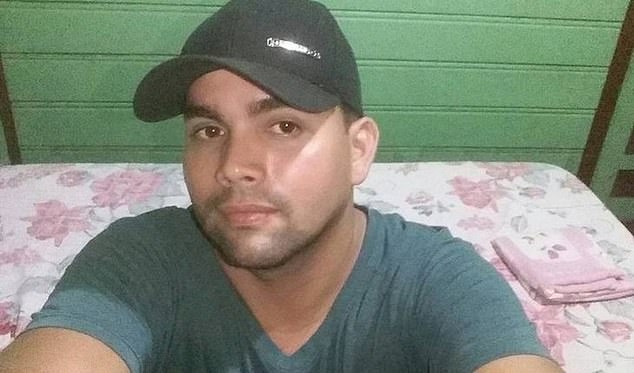 A Brazilian government official has reportedly been shot execution style in front of his family after spending 12 years working to protect indigenous people in the Amazon. Maxciel Pereira dos Santos was shot twice in the head in front of his family, according to a union that represents workers like him. Mr Santos was reportedly shot while riding a motorbike down a main street of Tabatinga, located deep in the Amazon rainforest on Brazil’s border with Colombia and Peru. He had spent more than 12 years working for the National Indian Foundation, Funai, which is a government body that protects the rights of indigenous people. INA cited evidence that his murder occurred in retaliation for Santos’ role in combating illegal invasions by hunters, loggers and gold miners in the Vale do Javari reservation, home to the world’s highest concentration of uncontacted indigenous tribes. Source