Because Opus Dei member Archbishop Vigano is trying to undermine the Authority of the Pope. 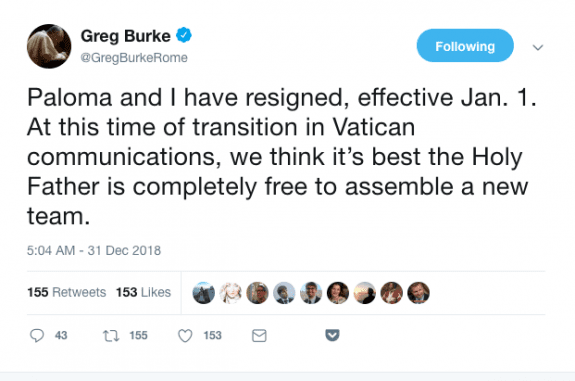 Alessandro Gisotti was born in Rome 44 years ago and is married with two children. Until now, he has been the Social Media Coordinator of the Dicastery for Communication.

Alessandro Gisotti is a professional journalist. He graduated in political science from Rome’s "La Sapienza" University in 1999. He became Deputy Editor-in-Chief at Vatican Radio, where he began working in the year 2000. Among other things, he has followed the activities of the last three Popes, both in Rome and on various international apostolic journeys.

He has taught journalism at the Jesuit Maximus Institute in Rome, and “Theories and Techniques of Journalism” at the Pontifical Lateran University. He has written several articles and essays on Church communications, including "The Decalogue of the Good Communicator according to Pope Francis", published in 2016 with a preface by Cardinal Luis Antonio Tagle, Archbishop of Manila.

In a statement following the resignation of Greg Burke and Paloma García Ovejero, and the appointment of Alessandro Gisotti, the Prefect of the Dicastery of Communication, Dr Paolo Ruffini, made the following statement:

"I have learned of the decision of Greg Burke and Paloma García Ovejero, and the acceptance by Pope Francis of their resignation. In these few months of working together, I have been able to appreciate their professionalism, humanity, and faith. I thank them therefore for the dedication with which they have carried out their work thus far. Today, faced with what is their independent and free choice, I can only respect the decision they have taken. Greg and Paloma (appointed to this task by my predecessor, Msgr. Dario Edoardo Viganò) were the first Director and Deputy Director of the Press Office following the start of the reform of the Holy See's communication system, decided by the Holy Father. Their significant commitment has contributed to the path of reform that today, according to them, in order to be carried out, requires a rapid hand-over of testimony, in the spirit of service to the Church that we all share. It is precisely with this spirit of service and fidelity to the Holy Father that I myself will carry forward the complex path of this important reform. The year ahead is full of important events that require the greatest effort in communication. I have full confidence that Alessandro Gisotti, until now Social Media Coordinator of the Dicastery for Communication, and former Deputy Editor-in-Chief at Vatican Radio, will be able to guide the Press Office ad interim, waiting for its new structure to be defined as soon as possible".

"I thank the Holy Father for the trust placed in me at such a delicate time for the communications of the Holy See. I have placed myself at the complete disposal of the Prefect, Paolo Ruffini. A relationship of esteem and friendship binds me to Greg Burke and Paloma G. Ovejero. I join the Prefect in thanking them for the work done over the last two and a half years in heading the Press Office. I will try to fulfill the task entrusted to me to the best of my ability, with that spirit of service to the Church and to the Pope that I had the privilege of learning by assisting Fr Federico Lombardi for almost 20 years. I know well that my task, however temporary, is particularly demanding, but I am comforted to know the great value of my colleagues in the Press Office whose professionalism and dedication I have been able to appreciate on many occasions". Source