DIVINE PROVIDENCE JUST PUNISHED PUTIN! The Blood Of St Januarius Liquefied In The Hands Of Ukrainian Major Archbishop Sviatoslav Shevchuk On The 85th Anniversary Of The Holodomor

Another Divine sign that Putin is losing his kingdom.....

On Sunday, November 18, the Ukrainian community in Italy marked the 85th anniversary of the Holodomor. On this occasion, Cardinal Crescenzio Sepe, Archbishop of Naples, displayed for veneration the most important relic of his eparchy - a vial with the blood of a saint, Martyr Januarius. At the final moment of laying the relics into the repository, the blood clot of Saint Januarius dissolved in the hands of Patriarch Sviatoslav, according to the Department of Information of the Ukrainian Greek Catholic Church.

Every year, on the day of the holy martyr Januarius, September 19, in Naples his thick blood turns into liquid. Such a miracle usually occurs three times a year: September 19, May 16, and Saturday before the first Sunday of May. The last time this miracle occurred during the visit to the archdiocese to the Holy Father Francis: the blood dissolved halfway.

On the occasion of the historic visit of the Head of the UGCC to the archdiocese of Naples, in commemoration of the 85th anniversary of the Holodomor, Cardinal Crescenzio Sepe personally displayed St. Januarius’ relics for worship. “Not only did you open the doors of your home and this beautiful cathedral, but also you willingly brought the greatest treasure of your archeparchy – the relics of St. Januarius,” said His Beatitude Sviatoslav in his words of gratitude to the Archbishop of Naples.

At the end of the Divine Liturgy, the head of the UGCC blessed the faithful with the relics, and then solemnly transferred it to the place of storage – a special repository of the lateral chapel of the cathedral. At the moment of reliquary repositioning, the blood of St. Januarius instantly became liquid. The guardians of the relics turned to the faithful with the announcement: “I have to tell you an important message, a miracle happened: the blood of St. Januarius became liquid in the hands of His Beatitude Svyatoslav,” demonstrating a capsule with a completely sparse blood. Thereafter, the Head of the UGCC again blessed the faithful with the relics of the saint. “During the liturgical procession, when I was carrying the relics of St. Januarius with awe, I pleaded him for the patronage of the Ukrainian people and the end of the war in Ukraine,” said His Beatitude Sviatoslav.

It should be noted that “the miracle of blood of St. Januarius” is a challenge for modern science. His blood froze already in the 4th century and several times a year it becomes liquid. Neapolitan saint is venerated both by the Catholic and Orthodox Churches. St. Januarius is the Italian holy martyr, who was a bishop and suffered the martyr's death about 305. He was decapitated. The Christians of Naples took the holy body, and collected his blood that had gone dry from the ground into a vessel. For many centuries, many miracles continued on its grave. The local people believe that the miracle of St. Januarius’ blood thinning is a sign that he takes care of their city and listens to their prayers. Source 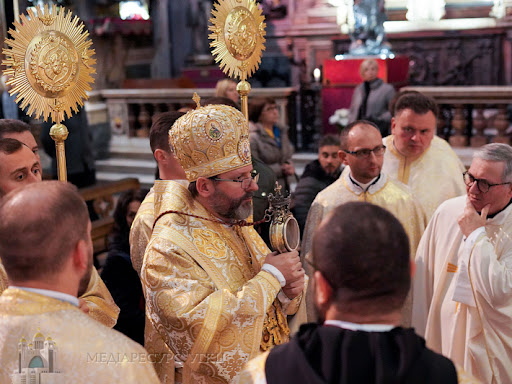