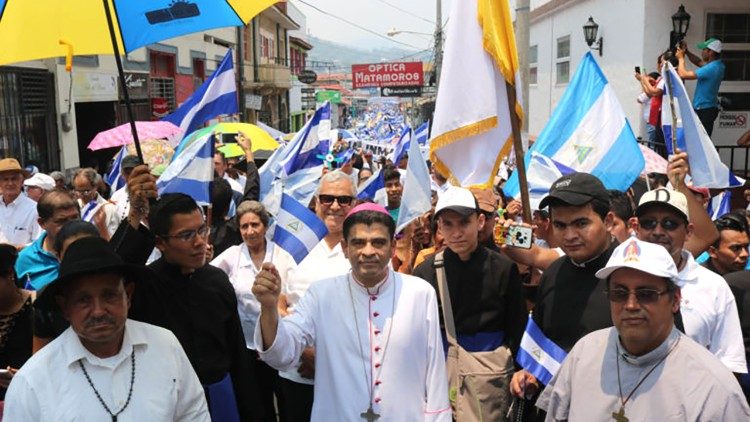 Participants march in a Pilgrimage for peace in Nicaragua in May

The Nicaraguan Government and opposition agree to a ceasefire temporarily ending demonstrations and sustained street fighting which has left almost two hundred people dead. The Church mediated this latest last gasp negotiations, which has led to a wary stadoff and truce. A previous attempt had failed. A Truth Commission will now be formed to investigate the crisis and to come forward with proposals to re-gain everyday normality. Last month the Inter American Commission for Human rights visited Nicaragua. Its report, just out... has severely criticised a heavy handed respsonse to the demonstrations from Government Security Forces. This has been dismissed as slanted and biased by the Foreign Ministry. Nevertheless, The Commision, plus Human rights factions of the European Unión and the United Nations will now come to Nicaragua, as part of this latest agreement. The crisis started on April 19th, when the Government of President Daniel Ortega, increased social security payments but simultaneously slashed pension payouts. The protests against that have now developed into demands for his resignation. Source

Seven members of a family, including three children, have perished in a fire at their home in the Nicaraguan capital Managua. It was one of the deadliest days of unrest in two months of confrontations between the government and protesters. One of the victim's uncles accused the police of starting the fire - and a neighbour backed up his claim. "We wanted to do anything humanely possible but the police didn't let us. They were attacked by the paramilitaries. They shot to kill," the neighbour, Jose Lopez, said. Two people were shot dead by police in the unrest which came just hours after President Daniel Ortega and protesters struck an agreement to end hostilities. The Secretary-General of the Organisation of American States tweeted that the fire was a "crime against humanity." Source