NORCIA To Be SWALLOWED UP By Destructive Earthquake! Signed Mélanie

The great chastisement will come. because men will not be converted; yet it is only their conversion that can hinder these scourges. God will begin to strike men by inflicting lighter punishments in order to open their eyes; then he will stop, or may repeat his former warnings to give place for repentance. But sinners will not avail themselves of these opportunities; he will, in consequence, send more severe castigation, anxious to move sinners to penance, but all in vain. Finally, the obduracy of sinners shall draw upon their heads the greatest and most terrible calamities Mélanie

OK. It seems as if some don't get the message - just like Mélanie said.


“We are a stubborn bunch, in this part of the world” Hilary White

Stubborn and sinful, and about to feel God's wrath. Some just don't get it.

All of the supporters of the Monks said that is was a sign of favor from God that none of Monk were killed in the Earthquakes. Just 350+ villagers died!

Oh, so 350 villagers die, but no Monks - If that line of thought doesn't give off alarms in some  - I don't know what will.

Shouldn't Monks pray for those villagers that live near by? Shouldn't the prayers of the Monks bring protection and blessings upon the villagers - not put them to death.

Something is not right about the Monks of Norcia and their groupies.

I read on Ann Barnhardt's blog on how the Monks of Norcia  knelt down in the town square with some lay folk to pray the Rosary during another earthquake. One of the Monks was incensed that the villagers didn't participate in the Rosary, but were preoccupied with fear that surrounding buildings would collapse upon them.

Barndart made it sound as if the Monks were righteous for admonishing the villagers for not praying on their knees in the town square during another earthquake.

But look at this photo of one of the Monastery Groupies: 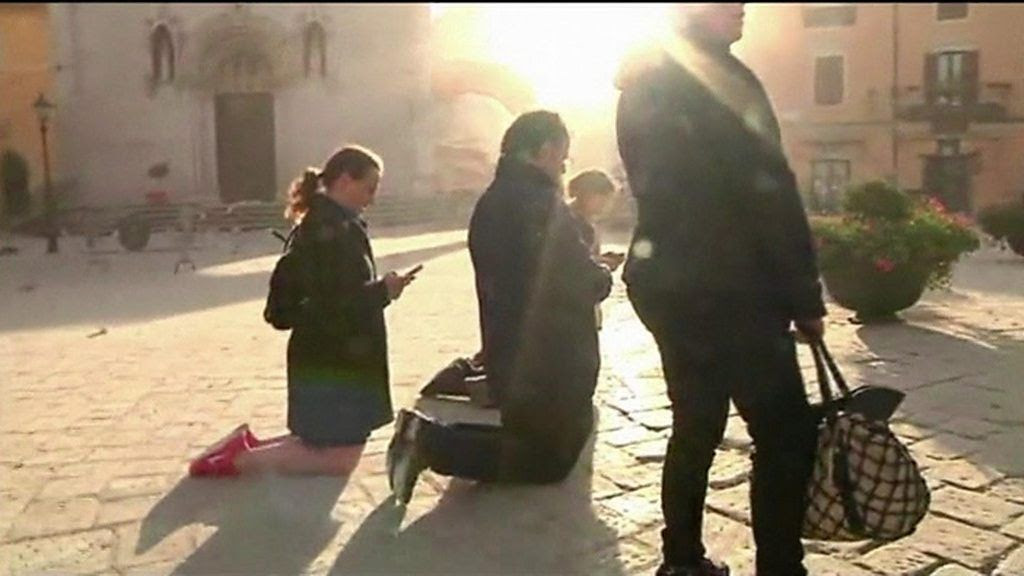 Texting & Taking Selfies While Praying The Rosary During Earthquake


What do you notice?

Texting or focused on their phones - and another take a pic of the event!

So the villagers are wrong for not praying the Rosary and the Monastery Groupies are righteous for texting and viewing their i phones during the Rosary,

Why did the Monk and his groupies kneel down in the Town Square?

Well to appease the wrath and ask the Blessed Mother for help.

But what kind of help do you expect if you text during the Rosary?

The above photo is evidence enough of a cloven hoof found in Norcia.

Norcia is about to be SWALLOWED UP by a destructive Earthquake.

Several cities will be shaken down and swallowed up by earthquakes. People will believe that all is lost. Our Lady of La Salette 19 Sept. 1846 (Published by Mélanie 1879)

May the Lord of Earthquakes pay a visit to NORCIA soon, because sure as hell, sinners will not avail themselves of these opportunities to open their eyes and repent - not the Monks - not the Monastery Groupies and not the villagers.