Pope Francis On His Meeting With Maduro, President of Venezuela: In-Flight Presser Flying In The Habitat Of Demons

Eva Fernandez: You recently met with Nicolás Maduro, president of Venezuela. What sensation did this meeting give you, and what is your opinion on the beginning of the conversations?

Francis: The president of Venezuela asked for an interview, and appointment because he came from the Middle East, from Qatar, the Emirates, and he made a technical stop in Rome. He asked for an interview first, he came in 2013, then he asked for another appointment, but he got sick and couldn’t come, and then he asked for this meeting. If the president asks, I receive him. What’s more, he was in Rome for a stop. I listened to him for half an hour, an appointment, I listened, I asked him some questions and I heard his opinion. It’s always good to listen to all areas, no? I listened to his opinion. In reference to the second, dialogue. It’s the only path for all conflicts, eh...for all conflicts...there is no other. I with my heart put it on dialogue, and I believe that one must go forward on this path. I don’t know how it will end, I don’t know because it’s very complex...but the people who are in dialogue have important political stature...Zapatero, who was twice president of the Spanish government...and the other, Restrepo… (Editor’s note: he probably refers to Martin Erasto Torrijos Espino, another mediator for the Venezuelan crisis) asked the Holy See to be present in the dialogue, on both sides. And the Holy See assigned the nuncio to Argentina, Archbishop Celli, who I think is on the flight of the negotiations. But dialogue that favors negotiation is the only path to go out of conflicts. There is no other. If this had been done in the Middle East, how many lives would have been spared. CNA Read More>>>>>>> 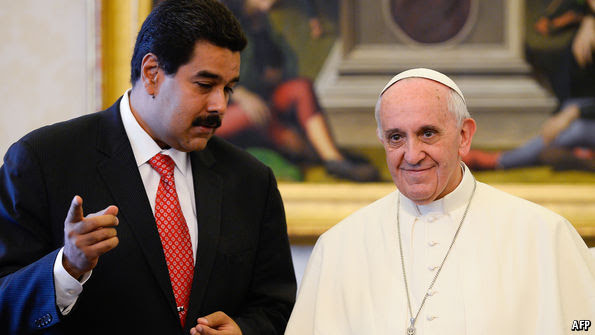