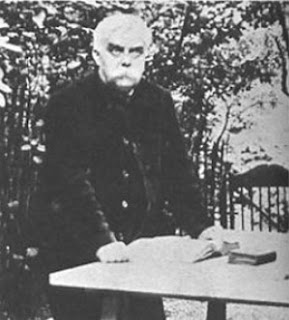 I pray like a robber asking alms at the door of a farmhouse to which he is ready to set fire. Leon Bloy

Leon Bloy was a "Melanist" meaning he believed all of the words Mélanie wrote down in 1879. Leon Bloy believed that the Mother of God spoke to Mélanie at La Salette. The words written down are from the Blessed Mother.

Most today mock Mélanie - many traditionalist refuse to believe the words of Mélanie. Why do trads reject the message of La Salette? I believe it has to do with the precursor to the Antichrist who will form an Army made up of soldiers from many nations - meaning nationalist. Many trads who reject the left and right fall into the middle - nationalism - especially trads in Europe. Many of these trads will find themselves in the army of the forerunner to the Antichrist and will find themselves on top the steep mountain lying in wait to kill the Fatima Pope.

Why did the Pope Quote Bloy? Does the Pope know about Bloy's interest in La Salette?

Considering that the Pope said his first Mass on a rolling table - I doubt it.

I do not think the Pope was hinting at the secret of La Salette when he quoted Bloy. Time will tell.