DOOM On The Feast Of The Epiphany! Drunken MUSLIMS Rape & Run Riot & Shoot Off Fireworks In Front Of Cologne Cathedral That House Relics Of Gaspar+Melchior+Balthazar! 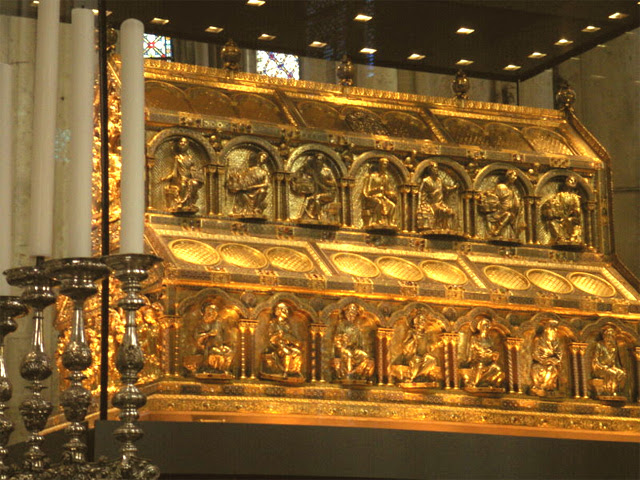 Doom for tomorrow + the feast of the Epiphany?

On New Years Eve Muslim refugees run riot in front of the Cologne Cathedral, the Cathedral houses the Relics Of the three wise men or three kings: Gaspar+Melchior+Balthazar.

The Muslims raped German women and broke into the Cathedral and took the women inside to rape them there.

The Muslims also set off fireworks in front of the Cologne Cathedral.

Angela Merkel allowed this desecration of the Cathedral by her Muslim refugees.

The following is video of the Muslim horde:

Berlin (dpa) - The German government condemned a series of sexual assaults on New Year's Eve in the western city of Cologne that has shocked the country, but warned against scapegoating refugees.

"There's nothing to indicate that the people involved were here as refugees," Cologne Mayor Henriette Reker said Tuesday.

The mass attacks near Cologne's main train station and its famed cathedral included more than 90 alleged sexual assaults and one rape.

The victims said the perpetrators were among a group of about 1,000 men who looked as if they were of "Arab or North African descent," police said.

The men were operating in small groups of about five, singling out the women and forming a circle around them in order to sexually assault them and steal their belongings, the victims told police. The crimes call "for a tough response from the law," regardless of the culprits' background, Merkel's spokesman said. The crimes have stunned Germany, where a massive influx of refugees from the Middle East and other regions has also triggered widespread xenophobia and anti-immigrant sentiment.

"The fact that such a large number of people of an apparent immigrant background perpetrated these attacks constitutes a new [criminal] dimension," Interior Minister Thomas de Maiziere said.

"This should not, however, lead to a situation in which refugees seeking protection here are placed under general suspicion irrespective of their origin," he cautioned.

Justice Minister Heiko Maas said police were dealing with a "completely new dimension of organized crime." He said that security in cities should be ramped up so that citizens were "not helplessly exposed to brute violence."

On Tuesday evening, about 250-300 men and women demonstrated against gender violence in front of the Cologne cathedral, police said. They demanded better protection and more respect for women.

Five men were arrested in Cologne on Friday, and investigations are ongoing.

Police in Hamburg said Tuesday that the northern port city had experienced similar attacks on New Year's Eve. Nine complaints of sexual assault and theft were made by women claiming to have been molested by men "with Mediterranean or Arab looks."

Reker's spokesman said that the mayor would come up with a plan on how to ensure security at the upcoming Cologne Carnival, which attracts more than a million visitors each February.