He who strikes the pope DIES! unless of course the pope isn't really the Pope!

Another Rad Trad calling for action because he's had enough!

But dear faithful Cardinals and Bishops, all hundreds scores-- well, even if there are ten, or five, or four, or one-- ANYBODY: This reign of terror against the faithful must end. Do something. Please. What can the faithful do if the pope isn't Catholic? If the pope hates Catholics? And what if the pope isn't a pope? What if the previous pope is still alive, wearing papal attire and insisting to be called "pope"? Surely you have something reassuring to say about that situation? Don't you see the need to do SOMETHING? For the sake of Our Lord and His Holy Church, for His Honor and Glory-- DO SOMETHING! Source

I thought the action of the Rad Trad was:

What more is left?

1. Declare Pope Francis not the Pope
2. Kill the non-pope 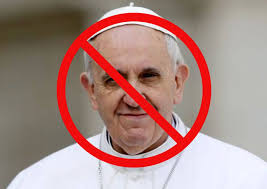