Ex- Episcopal Priest Taylor Marshall was involved in the false Conyers Apparitions of the Virgin Mary - He has since scrubbed any blog posting evidence. He has tried to do the same of his vision of the Church engorged with milk, tons of milk......

Well Ex- Episcopal Priest Taylor Marshall has now found a niche in the Rad Trad movement where the Rad Trads are apparently soaking up everything this convert has to say. 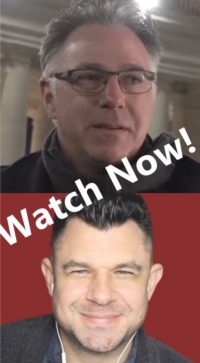 Here is the embarrassing vision of the Church engorged with milk, tons of milk......

“I was doing an examination of conscience before bed,” he explained, describing a common traditional Catholic practice, “and I was thinking on that point of being worried… about the Holy Catholic Church, Mother Church.

“And as I was, suddenly I saw this beautiful woman. She had blond hair, she was perfect, no wrinkles, no spots, and I immediately discerned that this was Holy Mother the Church.

“And she was writhing in pain. She was in a bed, there were sheets on her, and she was very sick. And I noticed that her breasts were engorged with milk, tons of milk. And there were babies and children crying out to her that were hungry. And she wanted to feed them, and she was upset, but she was so sick she could hardly sit up from her bed.

“And then I thought to myself, ‘Oh she’s poisoned, she doesn’t want to nurse the children because then she’ll give them the poison.’ And then there was this voice, it was like God or an angel, I don’t know, and it said, ‘No, the milk is still pure.‘

“And so I saw her there in all of her beauty, but so sick and struggling and loving those children and seeing all that milk stored up there. And I realized that the sacramental graces, the dogma, the doctrine, the morality, all of that in the Church is pure.

“So we just need to love Mother Church, and we need to be fed by Mother Church, and be patient, and know that any incorruption that enters the Church does not affect the milk flow. The nutrition that Mother Church gives us is always pure, it’s always unadulterated, we can always trust that until the end of time.

“Hope that’s a comfort to you as it was for me. God bless, bye.”