Proof That Priests Are Punished For Giving Communion To Non-Catholics: Catholic Priest shot dead in chapel at start of Mass in Nueva Ecija 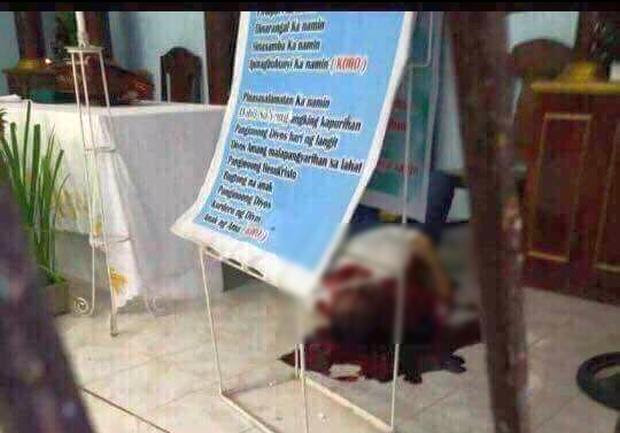 "Give not that which is holy to dogs; neither cast ye your pearls before swine, lest perhaps they trample them under their feet, and turning upon you, they tear you." Mt.7


Fr. Richmond Nilo was shot and killed by two gunmen before Mass.

Fr. Richmond Nilo did not listen to the warning of Our Lord who said not to give Communion to unworthy men.

Fr. Richmond Nilo most likely gave Communion to these two gunman at one time or another.

When a Priest knowingly gives communion to a non-Catholic or a Catholic who is a public scandal to others - the Priest will eventually be punished for his folly.

Ask yourself why the increased murders of Priests?

Fr. Richmond Nilo of the Diocese of Cabanatuan was shot to death by unidentified gunmen on Sunday in the Nuestra Señora de la Nieve Chapel in Zaragoza, Nueva Ecija, according to a spot report from the Nueva Ecija Provincial Police Provincial Office. Nilo, 40-year-old parish priest of Zaragoza, was behind the altar getting ready to start Mass at around 6:05 p.m. when two unidentified men shot him through a window four times. A Twittter post by CBCP News, the news service of the Media Office of the Catholic Bishops’ Conference of the Philippines, broke the news via Twitter. “We condemn the attack on Father Nilo as we Christians condemn all killings and violence and all forms of impunity,” said Fr. Jetts Jetanove, vicar general of the Diocese of Cabanatuan. Nilo is the third priest to be murdered following the April 29 attack on 37-year-old Fr. Mark Ventura and the Dec. 5, 2017 ambush of 72-year-old Fr. Marcelito Paez at Jaen town in Nueva Ecija province. Source