Oh Look They're Kneeling With Guns!

Muslims and those who attend Latin Mass have a lot in common.

There will be a day when Muslims and Latin Mass Traditionalists will fight side by side making war on the Church.

Joseph Shaw is promoting the work in 'converting' Muslim with the Latin Liturgy.

History lesson - the mad prophet Muhammad was a Catholic priest who desired to be Pope. Muhammad was never made pope, so he got even by creating his own hellish political party - called Islam.

Those Catholics who followed the false and lying prophet gave up their Catholic faith and gave up going to the Holy Sacrifice of the Mass and gave up all the Sacraments of the Church.

So Arabs who had a 600 year history of practicing the Catholic faith gave it all up for politics.

Now comes along Mr. Shaw who has the brilliant idea that Muslims will convert to the faith that their forefather left with their exposure to the Latin Mass.

Its a scam. Mr. Alexander Joseph Ranald Shaw is a British academic who desires to unite Muslim terrorist with Latin Mass gun nuts.

Mr. Shaw is using the Latin Mass as a vehicle to unite Muslims with Latin Mass pew sitters.


Joseph Shaw is the current chairman of the Latin Mass Society.

Shaw is using the LMS and FSSP to create a political force made up of Muslims and Latin Mass attendees.

Shaw is presenting a paper on Islam to fool the unwary:

Today I am able to publish the latest of the 'Position Papers' of the Una Voce Federation (FIUV), on the subject of Islam. These papers have not only sought to defend aspects of the Traditional liturgy which have been criticised, but also to point out the usefulness to the Church of this liturgy in making the Faith vivid, attractive, or comprehensible, to particular groups inside and outside the Church: in Africa, in China, in relation to the Oriental Churches, to children, to men, to people influenced by the New Age, and now to Muslims. Source

The only good thing that may come out of this, is that Latin Mass sites in England will not be a target of Muslim terror attack.

But here's the bad news - many Catholic Churches in England that offer only the new mass will be targets for bombings.

So what to watch for?

Bombings of Catholic Churches in England in the coming weeks and into 2018. 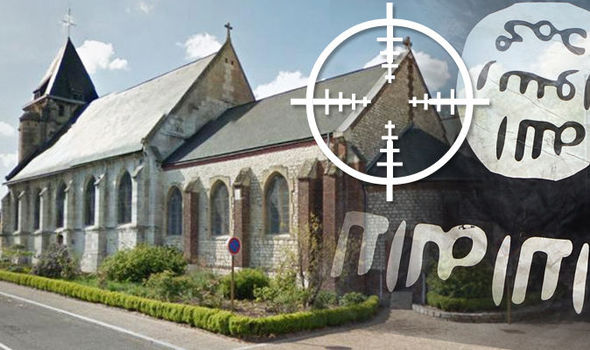