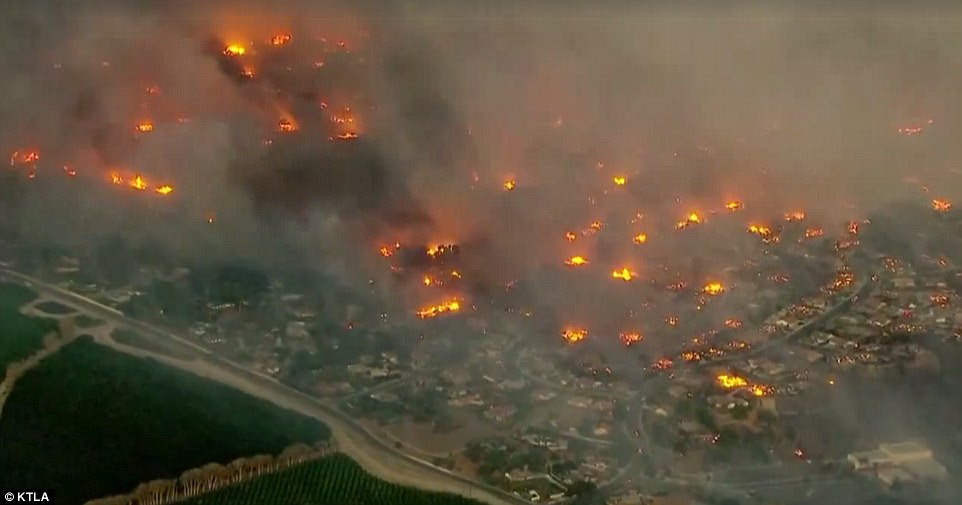 Pope Francis: Pray for elderly during December
(Vatican Radio) Pope Francis has revealed his prayer intention for the month of December, which is “for the elderly”. In a video message explaining the prayer petition, the Pope said “a people that does not take care of grandparents, that does not treat them well, has no future.” He added that the “elderly have wisdom, they are entrusted with a great responsibility: to transmit their life experience, their family history, the history of a community, of a people.” The Pope prayed: “Let us keep in mind our elders so that sustained by families and institutions, they may with their wisdom and experience collaborate in the education of new generations.” Care and respect for the elderly has been a prominent issue addressed by Pope Francis throughout his pontificate. Last year he hosted a meeting marking National Grandparents’ Day in Italy and in 2015 he gave two Wednesday audience catechises on the elderly, pointing out that old age has a grace and a mission” and is “a true vocation from the Lord.” The monthly videos detailing the Pontiff’s prayer intentions are promoted by the “Pope’s Worldwide Prayer Network,” an organisation dedicated to assisting the mission of the Church and addressing the challenges facing humanity. The group encourages Catholics from around the world to submit ideas for prayer petitions and presents a selection of them for the Pope to choose for each month. Source

Then this a few days later: 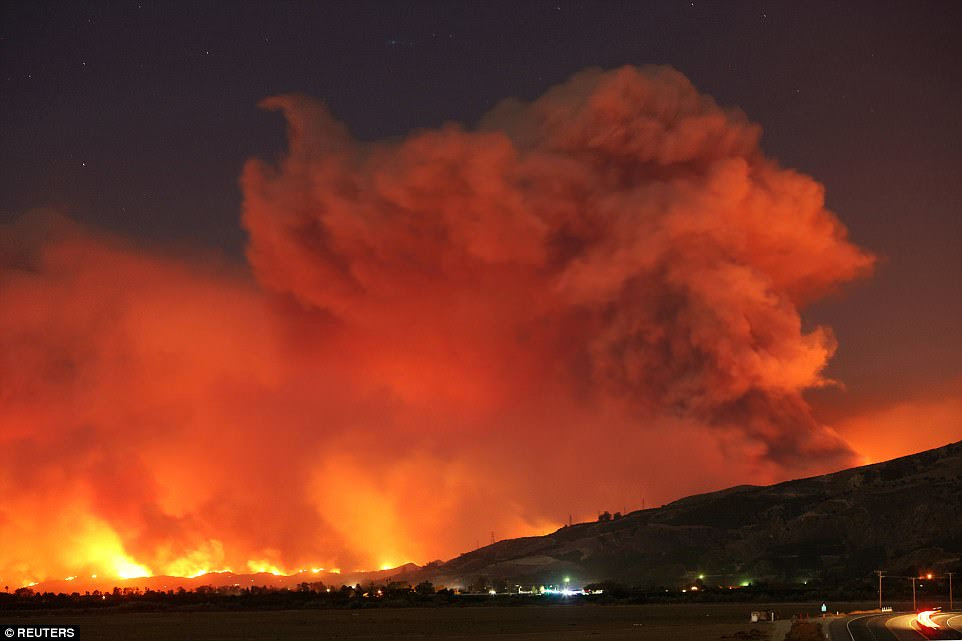 Entire lives wiped out at random: Wild winds fan 'out of control' 45,500-acre-fire across Southern California, randomly destroying some homes as neighboring plots survive unscathed and forcing 27,000 into evacuation

Flames from a 45,500-acre-wildfire have been spreading randomly from strong winds leaving some homes burned to the ground and other homes untouched. Live video feed from the brush fire that erupted in Ventura County, 70 miles northwest of Los Angeles, on Monday, showed houses completely consumed by flames sitting next to houses that were left unscathed. The Ventura County Fire Department warned residents early on Tuesday that powerful Santa Ana winds - which carry hot and extremely dry air from inland, and gust from 40mph to 60mph - would increase the blaze's destruction. The inferno, known as the Thomas Fire, has forced 27,000 residents to evacuate and hundreds of homes are expected to be consumed before the fire is brought under control. In the first 10 hours, the fire grew from 50 acres to 31,000 acres at a burn rate of approximately one acre per second. More than 260,000 residents have been without power and 150 structures have so far been destroyed during the blaze, which is at zero percent containment. source 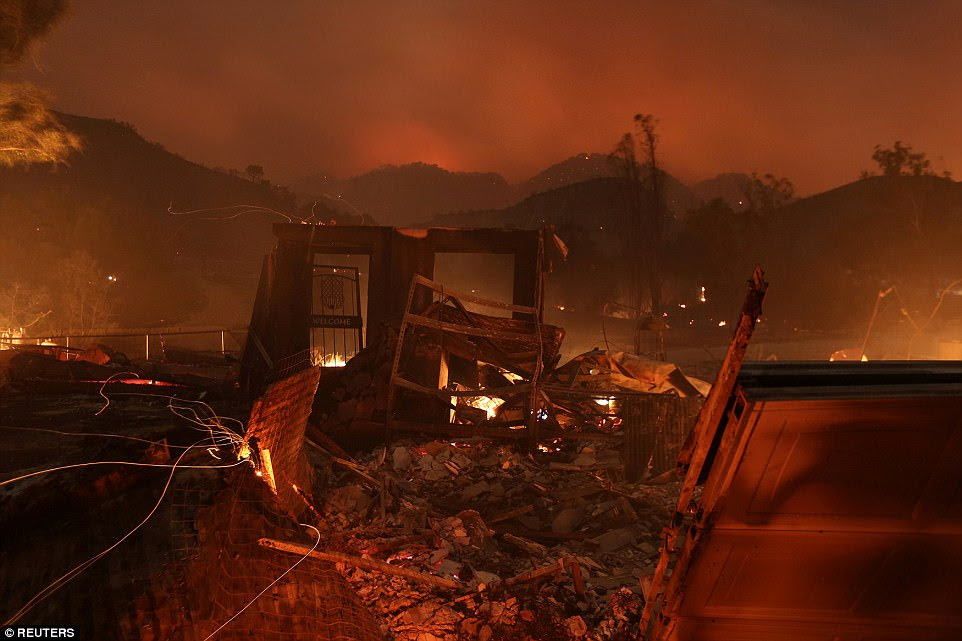 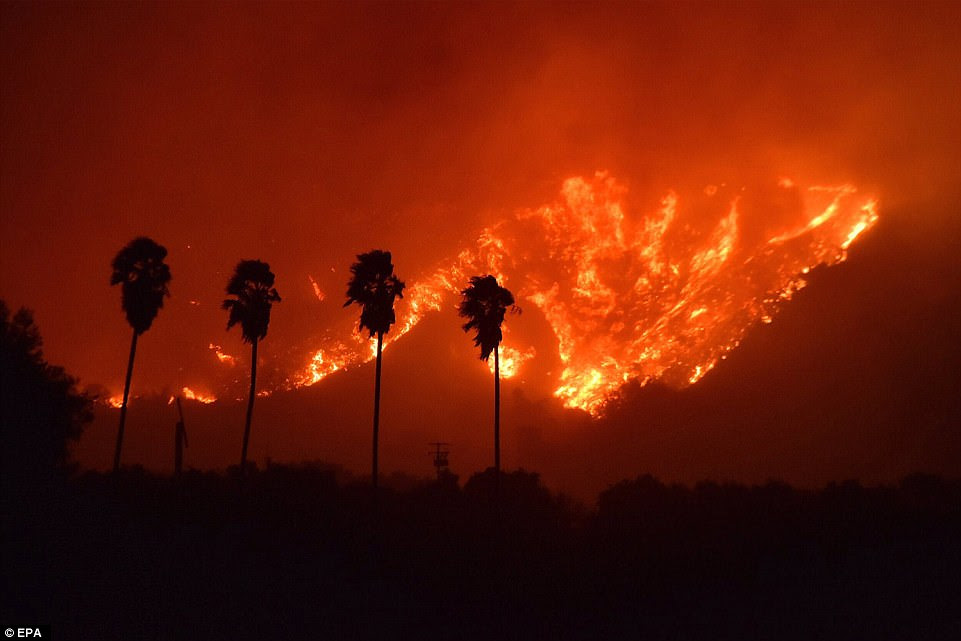 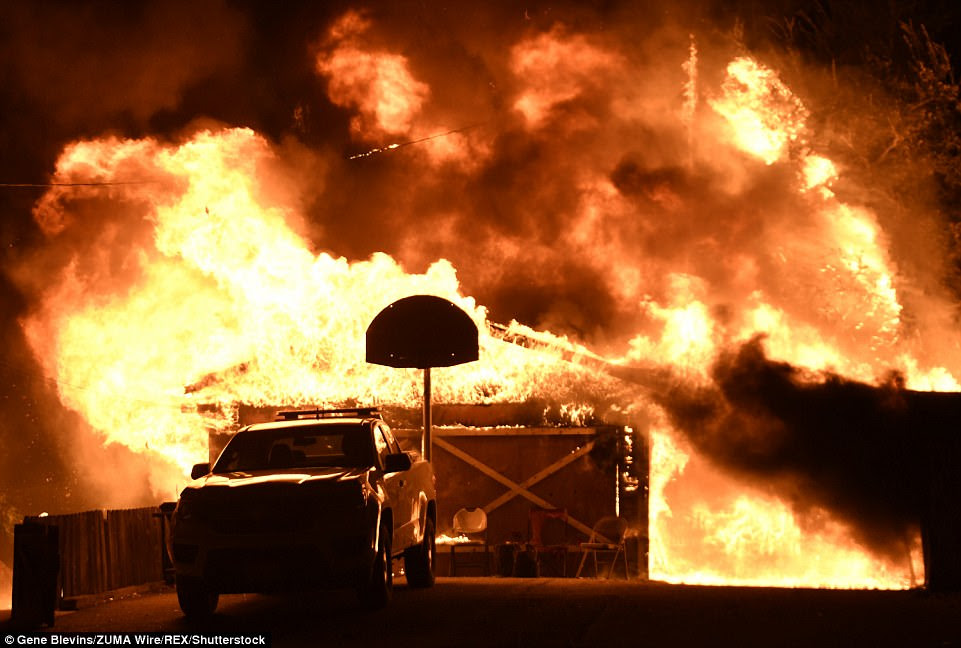