(Vatican Radio) After the recitation of the Marian prayer on Sunday in St Peter’s Square, Pope Francis expressed his closeness to the people of Portugal following devastating forest fires in the Pedrógão Grande area, south-east of Coimbra, which have killed and injured numerous people.  Source 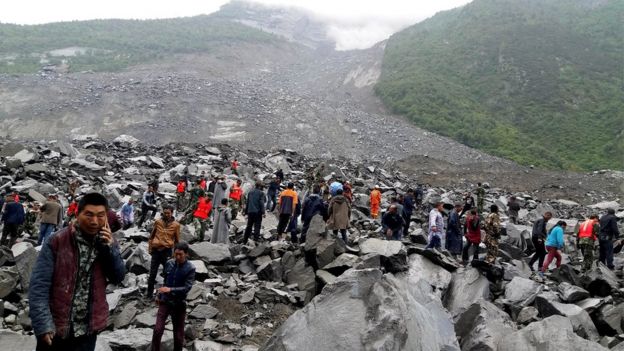 At the first blow of His thundering sword, the mountains and all Nature will tremble in terror, for the disorders and crimes of men have pierced the vault of the heavens.Our Lady of La Salette 19 Sept. 1846 (Published by Mélanie 1879)


BEIJING (AP) — More than 120 people were buried by a landslide that caused huge rocks and a mass of earth to come crashing into their homes in a mountain village in southwestern China early Saturday, officials said. The landslide, which came from a mountain, engulfed a cluster of 62 homes and a hotel in the village of Xinmo in Mao County at about 6 a.m., the Sichuan provincial government said. Officials said 1.6 kilometers (1 mile) of road were buried in the disaster. "It's the biggest landslide to hit this area since the Wenchuan earthquake," Wang Yongbo, an official leading one of the rescue efforts, told state broadcaster China Central Television. Wang was referring to China's deadliest earthquake this century, a magnitude 7.9 temblor that struck Sichuan province in May 2008, killing nearly 90,000 people. The provincial government said more than 120 people were buried by the landslide.   Source