Ann Barnhardt Indirectly Admits That We Have TWO POPES! LOL! 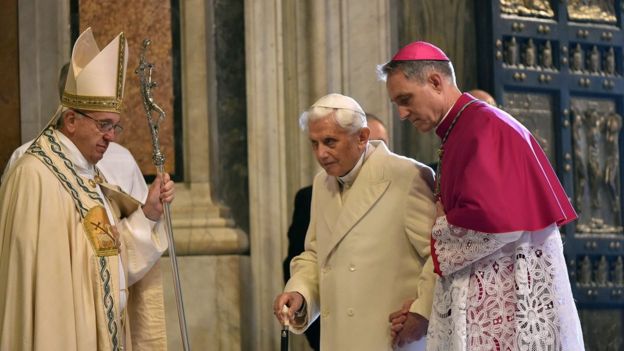 … just remind them of this, which a reader sent in with the subject header: “How in the hell is it that I have never seen this until now?”

This quote is from Pope Benedict XVI Ratzinger, and not only confirms his clear intention to only PARTIALLY abandon the Petrine Office, but also confirms that +Ganswein’s remarks at the Greg exactly one year ago were NOT +Ganswein’s own personal fabrication, but an accurate reportage of Pope Benedict XVI Ratzinger’s mindset with regards to his failed attempt at partial abdication and bifurcation of the Petrine Office. Read it over and over again until your conscience forces you to acknowledge the truth of what it so clearly says:

“The ‘always’ is also a ‘for ever‘ – there can no longer be a return to the private sphere. My decision to resign the active exercise of the ministry does not revoke this. I do not return to private life, to a life of travel, meetings, receptions, conferences, and so on. I am not abandoning the cross, but remaining in a new way at the side of the crucified Lord. I no longer bear the power of office for the governance of the Church, but in the service of prayer I remain, so to speak, in the enclosure of Saint Peter. Saint Benedict, whose name I bear as Pope, will be a great example for me in this. He showed us the way for a life which, whether active or passive, is completely given over to the work of God.”


which means we have TWO Popes as Mélanie had prophesied over 100 years ago.....