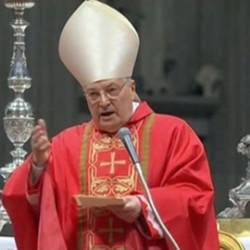 “the last pontiffs have been artificers of very many beneficial initiatives, toward individuals, toward peoples, toward the international community, promoting peace, justice, the world order.” Cardinal Sodano

Cryptic language? Pope Benedict used cryptic languge in paragraph 67 when saying that there is a urgent need for a true world authority.

What does Benedict mean by true world political authority?

What does Cardinal Sodano mean by world order?

Are these two phrases the same?

Why be cryptic about the United Nations or the new world order if that is what Benedict and Sodano mean?

Or do both men hint at a Universal Political Authority other than the new world order or United Nations?

If another world order - what is it?

Why the cryptic language?