The Altar At Subiaco Abbey, Arkansas, Was Desecrated 5 January 2023 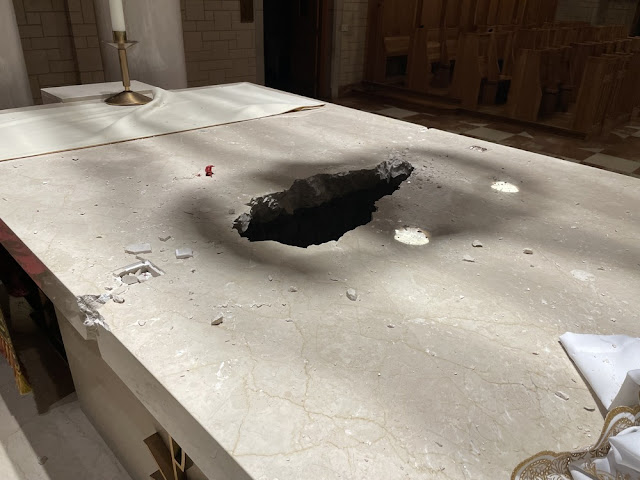 DESECRATION OF OUR ALTAR
On Thursday afternoon, January 5, 2023, sometime between 3:00 pm - 4:00 pm, a gentleman entered our Abbey Church and proceeded to desecrate our main altar. Through the use of a regular hammer and sledgehammer/axe, he destroyed the top of the altar and broke open the mensa stones containing the relics of our altar. He stole our two reliquaries in the mensa stones, both of which contained three relics. He had apparently then moved to the tabernacle, removed the cross on top, removed the tabernacle veil, and then was interrupted. Thankfully, the Blessed Sacrament and the Tabernacle were not damaged. When some guests notified us of the damage, the Logan County Sheriff was called and they came to investigate. By piecing together the testimony from multiple witness who had seen a strange man on campus earlier, we were fairly confident that we had seen him previously in our Church. Out of an abundance of caution, our Academy students were locked down while the investigation proceeded. Ironically, after the deputies had left, the gentlemen in question decided to return to the Church. The Logan County deputies were called and they quickly returned. One of our monks spoke to the gentleman and it became clear he was the one who had done the damage. He was arrested, his vehicle towed, and further investigations are ongoing. One of the reliquaries was found in his truck containing three of the relics, along with the hammer and sledgehammer/axe with marble dust still on them. Throughout this, our monks continued with our regularly communal prayers. Now that the gentleman has been caught and justice will proceed, may we also offer a prayer for him Source