"Cry 'Havoc!', And Let Slip The Dogs Of War." Putin's Men Are Being Blown Up, Poisoned And Shot... 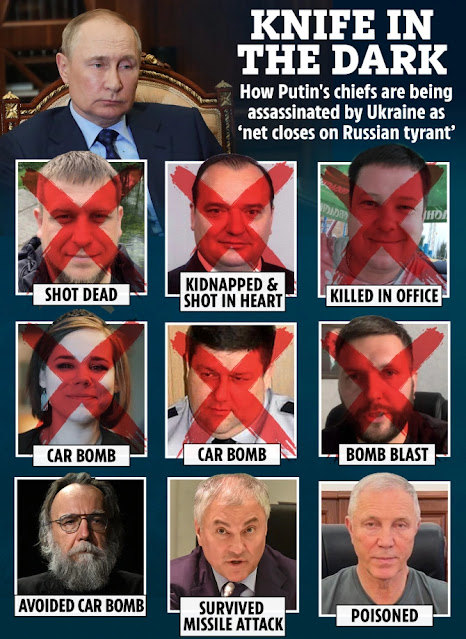 "Cry 'Havoc!', And Let Slip The Dogs Of War."spoken by Mark Antony in Act 3, Scene 1, line 273
KNIFE IN THE DARK How Putin’s chiefs are being blown up, poisoned & shot by Vlad’s enemies as ‘net closes on Russian tyrant’
UKRAINE’S resistance movement has one message for Putin and his stooges in Russian occupied parts of their country – you're never safe even in your bed. Recent weeks have seen an upsurge in targeted assassinations of officials who have been shot, blown up and poisoned for working with the hated invaders.It comes as Ukrainian and Russian assassins race to take Putin out before he escalates his unwinnable war. Putin faces a "double whammy" of threats from his inner circle who are believed to be secretly calling for his head, experts claim. They accuse the Russian tyrant of being behind the grisly death of far-right journalist Darya Dugina in Moscow last week. The Kremlin accused Kyiv of masterminding the attack on Russian soil and claimed they used a glam Ukrainian spy, her young daughter, and a Mini Cooper to carry it out - allegations its secret services have strongly denied. Dugina criticised Putin for being "too soft" on Ukraine and her death has being seen by many as the Russian leader's attempt to quell critics. Former NATO chief Gary Tabach, now based in Kyiv, said Ukrainian forces were "hunting down" Kremlin sympathisers in the occupied territories. He told The Sun Online: "Guys who betrayed Ukraine; some of the deputies, some of the leaders of Ukraine who ended up in Russia right now voluntarily, will be for the rest of their lives hunted down. "Ukrainians have a very good imagination, they're very innovative and are good at tracking them down." Source