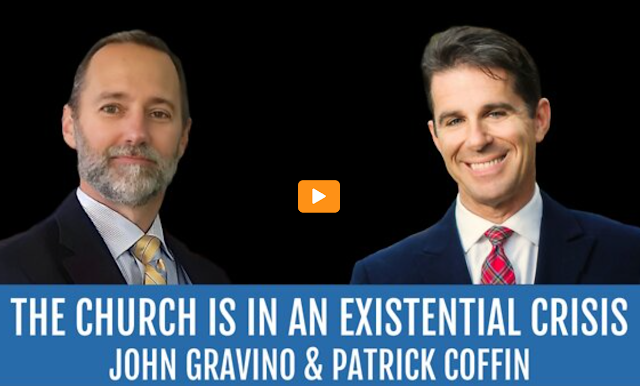 "During the time of the approach of the punishments announced at La Salette, an unlimited amount of false revelations will arise from hell like a swarm of flies; a last attempt of Satan to choke and destroy the belief in the true revelations by false ones." Marie Julie Jahenny of La Faudais
Porn warps the mind.
Sucking on tubes of horse paste for a year and downing Ivermectin Whiskey Sours every morning for a year causes one to become stoopid...
How could a ex-porn addict not know that John Gravino is having private revelations?
Maybe he ignores it.
Coffin did a Podcast with John Gravino. 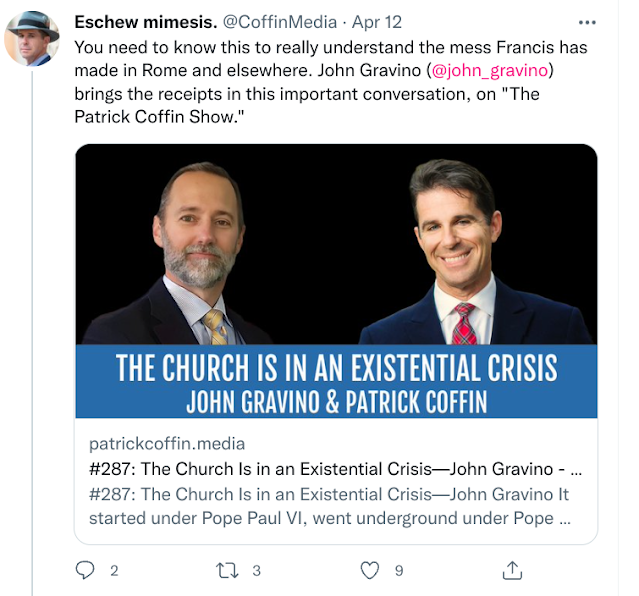 The main message is that we entered into the Great Tribulation when Francis placed the pachamama idol inside St. Peter’s Basilica. The original message was given to me in 2001, 18 years before its fulfillment in 2019. I published the prophecy in 2016, at Jesus’ request. The publication date is EXACTLY 3 1/2 years prior to the fulfillment of the prophecy. The prophecy predicted 3 significant events of the Francis pontificate during those 3 1/2 years. Each event was followed by a chastisement, indicating God’s displeasure with Pope Francis.
The new message, which is the topic of episode 2, concerns a sequence of numbers that I received. The number sequence looks like a timeline of the Great Tribulation. This March of 2022 is at the beginning of this timeline, and it indicates that Ez. 5: 11 was fulfilled just this past March. What does Ez. 5: 11 describe? That depends on the translation, but the translation that makes the most sense says that God is withdrawing his presence AND PROTECTION from the disobedient of the Church. That would include POPE FRANCIS. It might include St. Peter’s. It might include Rome. Or Europe. Or the whole world.
Thus, this new message is God’s answer to the consecration: God is not offering any additional protection against Russia. And WORSE, God is withdrawing his protection from those things that had been formerly protected. The consecration is rejected.
God will remain with the Church always, as Jesus promised, and satan will not prevail. But the disobedient will receive their due punishment; they no longer enjoy God’s protection. The only people God will listen to are the faithful. The fate of the world depends on their prayers and sacrifices. Source

Here is the partial Rumble video of Patrick and John - Patrick is a piece of shit who wants you to pay him to see the complete interview.- once word gets out that Patrick has fallen in with false seers, I bet even this partial video disappears from Rumble.....LOL!